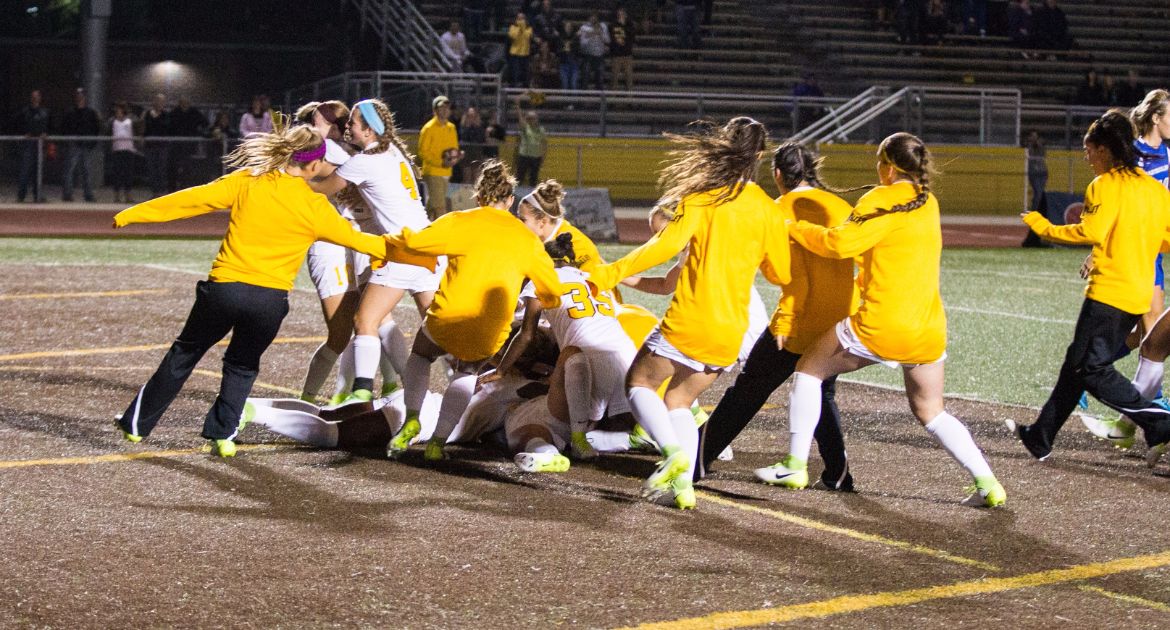 The Valparaiso University women’s soccer team gave fans more than their money’s worth in non-conference action at Brown Field Friday night, as the Crusaders’ persistent push forward resulted in an equalizer from sophomore Tahelah Noel (Buffalo, N.Y./Christian Central Academy) with 75 seconds to play. Then, just 39 seconds into overtime, junior Cory Griffith (Lemont, Ill./Providence Catholic) delivered her first goal of the season to complete the comeback and give Valpo a 3-2 victory over Eastern Illinois.

Less than a minute into extra time, freshman Keegan Maris (Batavia, Ill./Batavia) found herself with plenty of room to maneuver on the right flank. Maris sent a cross into the center of the box, where Griffith dove forward and headed home inside the left post for the golden goal.

- After going down a goal in the 67th minute, Valpo pushed forward over and over again attempting to even the game at 2-2. Over the next 22 minutes, the Crusaders would rattle off nine shot attempts and earn five corner kicks in search of the equalizer, but were unable to come through.

- Finally, with the clock ticking down near one minute to play, Valpo broke through. Junior Natalia Kontul (Solon, Ohio/Solon) served up yet another corner kick. This effort found the head of Griffith, who nodded it towards goal looking for the tying tally. Griffith’s effort was knocked off the line by an EIU defender, but ricocheted off Noel – who had been stationed at the far post for the corner – and into the back of the net to tie the game.

- Griffith would find her goal less than two minutes later, on the other side of the 90-minute mark for her first goal of the season to keep the Crusaders perfect at home on the season.

- Valpo found itself having to push late in the second half after EIU scored twice in a 7-minute span to take the lead. Just a tick before the hour mark, the Panthers’ Carrie Caplin took a free kick from about 25 yards out on the left side and sent it in along the ground. The effort rolled in untouched and snuck inside the far post to tie the game at 1-1.

- Then, in the 67th minute, a shot at goal from the Panthers was stopped by a Crusader handball, resulting in a yellow card and a penalty kick. Emma Scaro slotted home the attempt from the spot to give EIU the lead.

- A dominant first half from the Crusaders resulted in just a 1-0 lead at the break. Junior Sydney Griffin (Hinsdale, Ill./Hinsdale Central [New Hampshire]) opened the scoring in the 13th minute as she gained possession off a turnover and sent a shot from the right side of the box, about 15 yards out, off the left-hand post and into the back of the net.

- After scoring a program-record five match-winning goals last season, Griffith made her first goal of the 2017 campaign a match-winner as well. She is now tied for seventh in program history with six career match-winners.

- Noel’s goal was her second of the year, while Griffin tallied her third goal in her first five games as a Crusader.

- Maris’ assist on the match-winning goal was her first career helper. Griffith picked up her first assist of the year after registering three last season, while Kontul now owns two assists this season.

- Valpo has now won its last three games which have extended into extra time, dating back to last season. The golden goal win also marks the Crusaders’ 10th straight extra-time contest which has not gone the full 110 minutes to a draw.

- The Crusaders dominated the majority of the match, finishing the evening with a 25-8 advantage in shots and a 10-1 edge in corner kicks. Sara Teteak made three saves in goal for Eastern Illinois (2-2-1), while junior Drew Moulton (Sycamore, Ill./Sycamore) stopped one shot to improve to 3-0-0 this season for Valpo.

“I thought we came out well in the beginning of the match and utilized the width of the park really well. We got a very good finish from Syd to get us on the board, and I felt like defensively in the first half, we did a really good job not giving away clean looks at goal.”

“We got a bit loose with our performance early in the second half and gave away some things we shouldn’t give away, and we were punished for it. The positive that comes from it is that we were able to turn the game around, utilize our width again and were able to score and force overtime. I’m then really pleased that we took what we talked about leading into overtime, adjusting our service into the box, and went out, executed and got a diving header to win the game.”

“We’re excited about the result tonight, but again this game gives us the opportunity to look how we can be more efficient on the attack.”

Valpo (3-2-0) looks to remain perfect at home on Sunday afternoon as the Crusaders host Belmont for a 1 p.m. kickoff. The four Crusader seniors will be honored on Senior Day at Brown Field prior to the match. Links for live stats and live audio (WVUR, 95.1 FM, Valparaiso) will be available via ValpoAthletics.com.