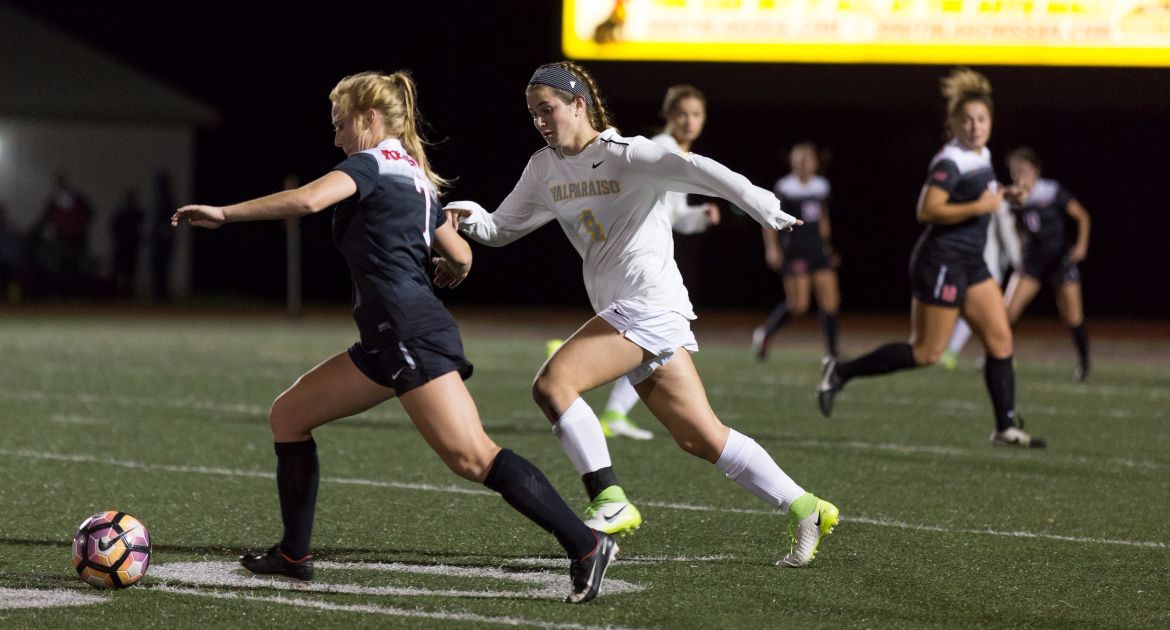 A 10th-minute goal proved to be the difference in Missouri Valley Conference action Wednesday evening at Brown Field, as the Valparaiso University women’s soccer team dropped a 1-0 decision to Illinois State.

- Valpo threatened the Redbirds right off the opening kickoff, as junior Sydney Griffin (Hinsdale, Ill./Hinsdale) forced ISU goalkeeper Haley Smith to make a save just 16 seconds into the match.

- The game’s lone goal came in the 10th minute, as a Crusader clearance attempt in the box ricocheted off of the Redbirds’ Emily Dickman and in for what would prove to be the decisive tally.

- Illinois State kept the pressure on throughout the first half, out-shooting the Crusaders 10-3 over the first 45 minutes and earning six corner kicks, but junior Drew Moulton (Sycamore, Ill./Sycamore) made four saves to keep it a one-goal match.

- The Crusaders started out the second half much like they opened the first period. Junior Cory Griffith (Lemont, Ill./Providence) had a shot attempt blocked just 17 seconds into the half, and then a little over two minutes later, an effort from the left side of the box from Griffith went just right of the far post.

- Valpo had more of the chances in the second half, out-shooting the Redbirds 5-2 and putting three shots on goal, but was unable to find the equalizer. Perhaps the best chance came in the 66th minute after a foul was called just outside the left edge of the box, but the ensuing shot on goal from Natalia Kontul (Solon, Ohio/Solon) was gobbled up by Smith.

- The shutout marked the first time the Crusaders have been held scoreless this year in MVC play. Valpo had scored in six consecutive matches prior to Wednesday night.

- Four of the Crusaders’ first five Valley matches have been decided by one goal.

- Illinois State ended the match with a 12-8 edge in shots. Smith made five saves for ISU, while Moulton stopped four shots for the Crusaders.

“I think this is a great opportunity for us to grow as a team tonight.”

“We battled for 90 minutes, and I especially liked our battle in the second half. But we obviously have to do a better job not putting ourselves behind early and having to chase the game.”

“As we continue to move through the Valley, I think tonight our players started to show a bit of the adaption to what we need to bring to be successful. We’re looking forward to our game on Sunday, hoping we can continue to grow as a group and fight hard together to get a result.”

Valpo (8-8-0, 2-3-0 MVC) faces its final road test of the year Sunday afternoon at noon CT as the Crusaders travel to Indiana State. The match can be seen live on The Valley on ESPN3, WatchESPN and the ESPN app, with links for the live coverage available at ValpoAthletics.com.