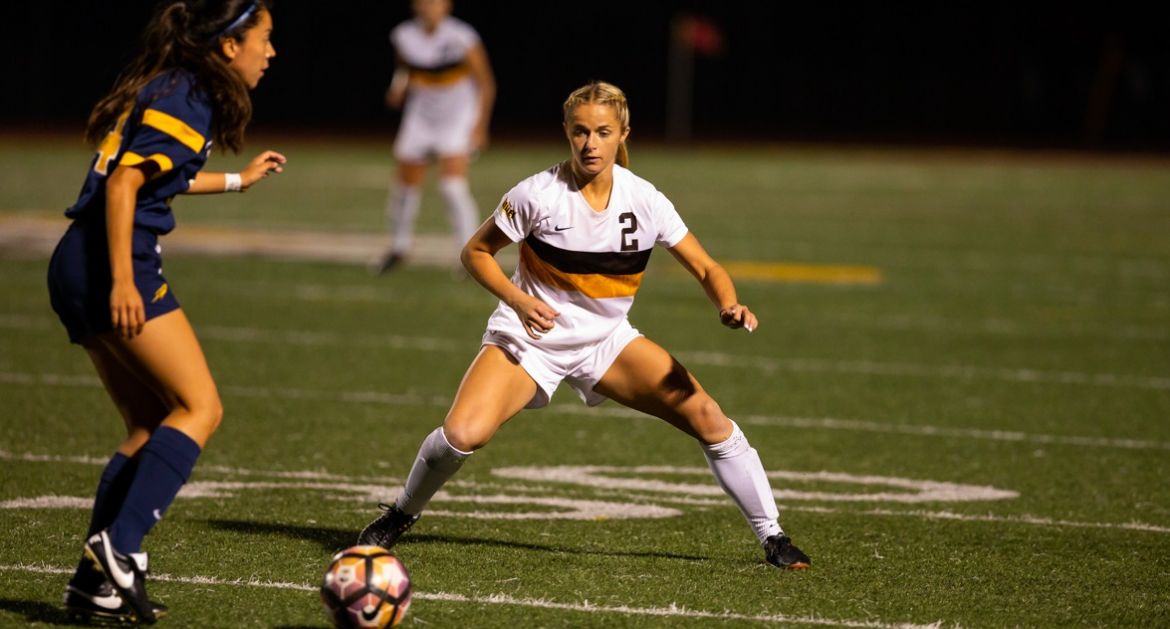 The Valparaiso University women’s soccer team fought back from an early one-goal deficit Sunday evening at Brown Field against Purdue Fort Wayne, but the Mastodons scored the decisive goal in the 68th minute as Valpo fell by a 2-1 final.

How It Happened
- Purdue Fort Wayne jumped on top less than 90 seconds into the match, as Kailyn Wade won the ball from a pair of Valpo defenders in the box and struck from six yards out to give the Mastodons the quick 1-0 advantage. Hannah Kroger and Breanna Buche earned assists on the tally.
- Valpo leveled the match in the 14th minute on a penalty kick. Senior Cory Griffith (Lemont, Ill./Providence Catholic) drew the foul in the box to earn Valpo the chance at the spot kick, and then stepped up herself and calmly drove the penalty into the right-hand side of goal to make it a 1-1 scoreline.
- It would remain a 1-1 contest through halftime, and the teams remained knotted up through the first 20-plus minutes of the second half.
- But in the 68th minute, just past the midway point of the period, Purdue Fort Wayne found the match-winner. Kroger played a ball forward, where Kendall Quinn was able to split a pair of Valpo backs and run onto the pass for a one-on-one with Valpo goalkeeper Drew Moulton (Sycamore, Ill./Sycamore). Quinn found the back of the net for what proved to be the difference in the final result.

Inside the Match
- The start of the match was delayed one hour, 47 minutes due to lightning in the area.
- Griffith’s goal was the 22nd of her career, breaking a tie with Emily King for third-most in program history.
- Griffith also became just the fifth player in program history to reach 50 career points with her goal.
- Valpo controlled much of the match, and while the Crusaders ended up out-shooting Purdue Fort Wayne (1-2-1) by just a 12-9 margin, Valpo was able to earn nine corner kicks against just three for the Mastodons.
- Moulton took the loss in goal for Valpo despite making five saves, while Lorah Pund entered at half in goal for Purdue Fort Wayne and made three saves to earn the win.

Thoughts From Coach Marovich
"It was unfortunate that we gave away the early goal; it forced us to chase the game a bit. I was proud we were able to get that goal back, but in the end today, we lacked a little bit of discipline in some of the details. Whether it was in the attacking third or in the back, we opened ourselves up and committed some errors, and we got punished for it tonight."

"There's still some great lessons which can be learned from today's game and help us grow as a group. Going through adversity is a great thing, because it allows us to work on our culture and our character. I think this group will work through it, and we'll learn from today's experience."

Next Up
Valpo (1-2-1) continues its four-match homestand next Friday night at Brown Field, hosting Bowling Green at 7:30 p.m. The match will be broadcast live on ESPN+.