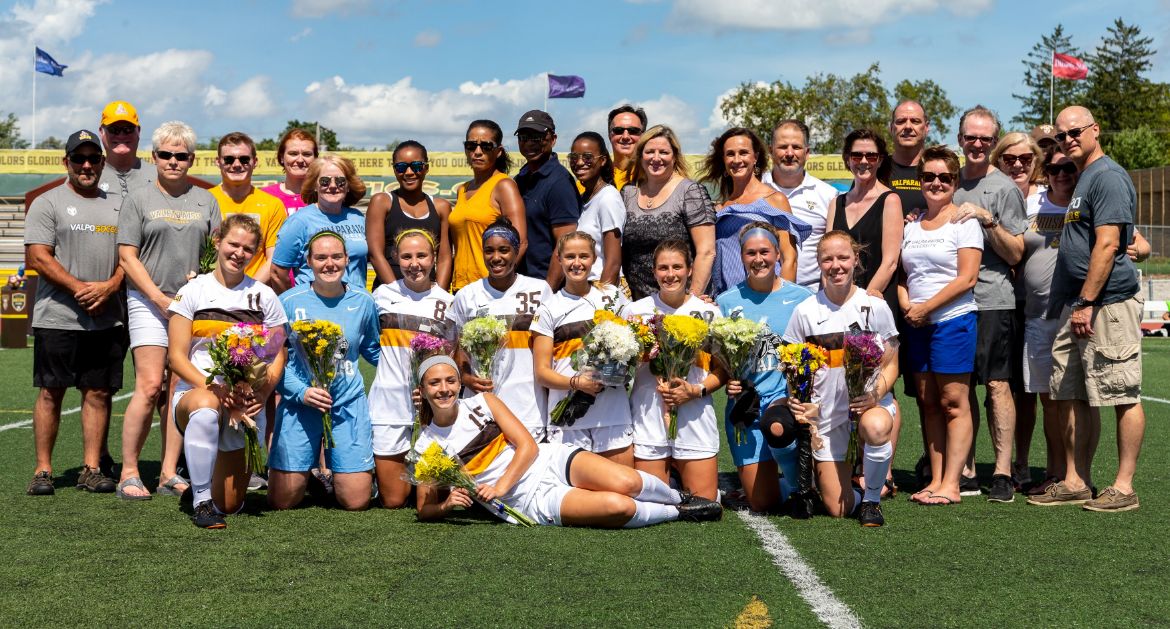 The Valpo seniors and their families prior to Sunday's win. (Corey Lissy)
Robert Morris at Valparaiso | September 02, 2018 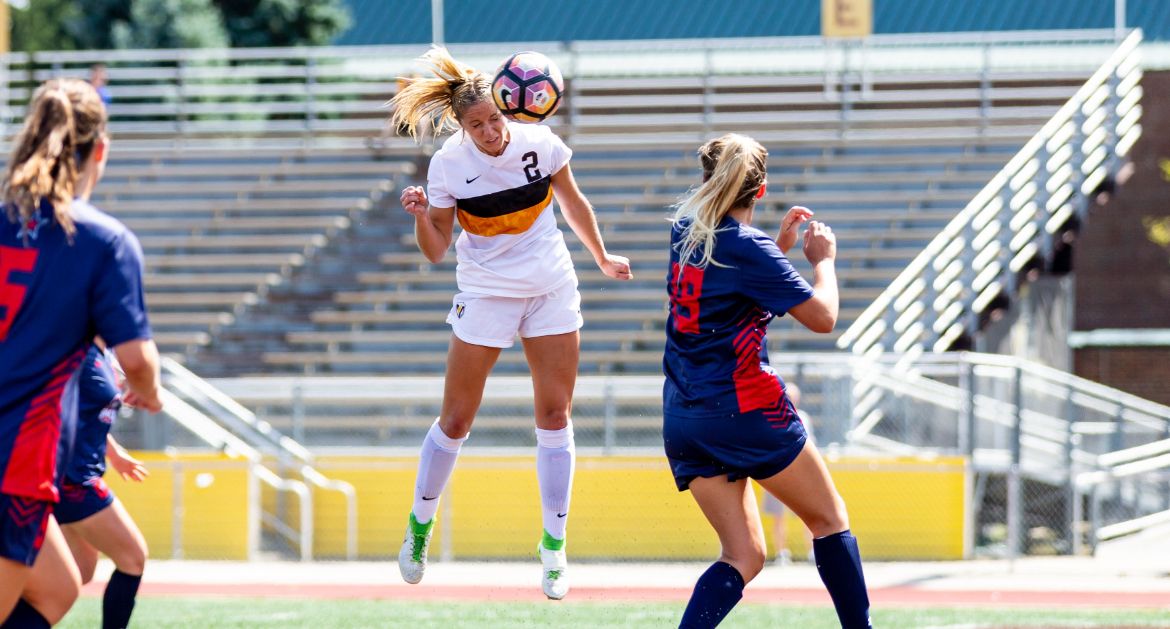 When it comes to Senior Day memories, Sunday’s performance by Valparaiso University senior Cory Griffith (Lemont, Ill./Providence Catholic) ranks right up there with the best. After being forced off for five minutes early in the first half with a cleat issue, Griffith came back on sporting new shoes and proceeded to strike for four goals in the next 32 minutes, setting a program record for goals in a match as Valpo took down Robert Morris (Pa.) by a 4-2 final.

How It Happened
- After playing just 39 minutes on Friday before lightning forced the match to be abandoned, Valpo came out both feet forward on the attack Sunday afternoon. The Brown and Gold fired off four shot attempts in the first 11 minutes, three of which were on goal and had to be saved by RMU goalkeeper Sydney Bruckner.
- Griffith came off 11:30 into the contest and was sidelined for just over five minutes, with Valpo playing 10-on-11, while a teammate ran back into the locker room for a backup pair of cleats.
- The senior came back on at the 16:35 mark and immediately made her mark on the back end of a nice combination play. Senior Caitlyn Oliver (Commerce Township, Mich./Walled Lake Northern) dropped a pass from the right sideline to a charging Adi Johnson (Rockford, Ill./Rockford Christian), just outside the box on the right side. Johnson put a cross in along the ground, which Griffith beat her defender to and finished with her right foot inside the near post to put Valpo on top.
- The 34th minute saw Griffith make it a brace, in large part thanks to a nice delivery from fellow senior Sydney Griffin (Hinsdale, Ill./Hinsdale Central [New Hampshire]). Griffin was able to sprint down the right sideline and get to the endline, where she delivered a great ball in the air to the center of the box. Griffith out-leapt the RMU defender and hung in the air long enough to get her head on the ball and nod it into the center of the goal, making it 2-0 Valpo.
- RMU pulled a goal back in the 38th minute, as Jane Schleicher ran onto a long ball behind the Valpo back line and chipped it high over the keeper to cut the lead to 2-1.
- But just over a minute later, Griffith would complete the first-half hat trick. A pair of Valpo attackers and a number of RMU defenders were battling for possession near the top of the box, and it would be Griffith who came away with it, turned with her left foot and fired just inside the right post for her third goal of the game and a 3-1 Valpo lead.
- The senior would not be satisfied with the hat trick, however, as she completed the record-breaking performance with a 48th-minute goal. Griffith played Griffin into the attacking third down the left flank and then made a run down the center of the park. Griffin delivered a low driven cross which Griffith took on the second short hop with her right foot, rifling the effort inside the left post for her fourth goal.
- Schleicher completed her own brace for Robert Morris in the waning seconds of the match for the final tally.

Inside the Match
- Valpo celebrated its nine-player senior class – Griffin, Griffith, Oliver, Tess Barrett, Kelsey Jahn, Natalia Kontul, Drew Moulton, Ava Porlier and Eva Schneider – prior to the match. Eight of the seniors started, with Barrett coming in off the bench to relieve Moulton in goal for 15 minutes in Barrett’s first action since the 2016 season.
- Valpo is now a perfect 6-0-0 since moving Senior Day to the final non-conference weekend match of the season, starting in 2013.
- Moulton blanked RMU for her 75 minutes in goal, while each of the seven seniors in the field played at least 52 minutes.
- Playing in her 42nd career match in the Brown and Gold, Oliver’s assist on the opening goal was her first career point.
- Griffin recorded the first multi-assist game of her Valpo career and now has seven assists in her two seasons in Northwest Indiana.
- Then there’s the exploits of Griffith. The senior becomes the first Valpo player to ever score four goals in a game, and is the only player in program history with multiple hat tricks during her career.
- Her eight points on Sunday also set a single-match record for most points by a Valpo player in a single match.
- The match-winning goal for Griffith was the 11th game-winner of her career, breaking a tie with Lori Moore and April Cronin for most match-winners in program history.
- Griffith has now scored 26 career goals, alone in second all-time at Valpo, and has recorded 58 points, third-most in program history and just three shy of second position.
- Valpo outshot Robert Morris (1-5-0) by a 20-7 margin and put 12 shots on goal to the Colonials’ four. RMU came into Sunday’s match having fallen by only a 1-0 final on Friday at Milwaukee, which has won 17 of the last 18 Horizon League titles. In fact, Sunday’s result was the first match of the year for RMU decided by more than one goal.
- Valpo snapped a five-match losing streak at Brown Field with Sunday’s victory.

Thoughts From Coach Marovich
“I was really happy with the way we started the game today. I felt Adi Johnson was locked in - she was sitting in some nice seams and really got us going in possession. We really played through Adi today, and the rest of the group fed off the way she was playing. We built the attack well and put together some really good combinations that we got work product from. Our work has been the same throughout these first few weeks of the season, but we were rewarded for that work today with results on the end in the form of goals, and I was really happy to see that.”

“I'm really excited for Cory - to score four goals on your senior day is a great accomplishment and it was great to watch her set a record today. It was also great to see Syd in the attack getting points, she delivered a quality performance and watching her and Cory connect was really awesome. We've asked her to play a couple different positions this year, and she's taken on the responsibility with whatever role the team needs her to play.”

“We have a big senior class, a group that's brought us a lot of joy and excitement. Today's Senior Day was a real good way to celebrate their careers and the way we played was really a showcase of their personality on the park. We're honored to be a part of their careers and lives. We'll enjoy this for today and start to worry about next weekend tomorrow.”

Next Up
Valpo (2-2-1) heads down to Tennessee for a pair of matches next weekend, starting with a Friday evening match at Middle Tennessee State at 6 p.m.