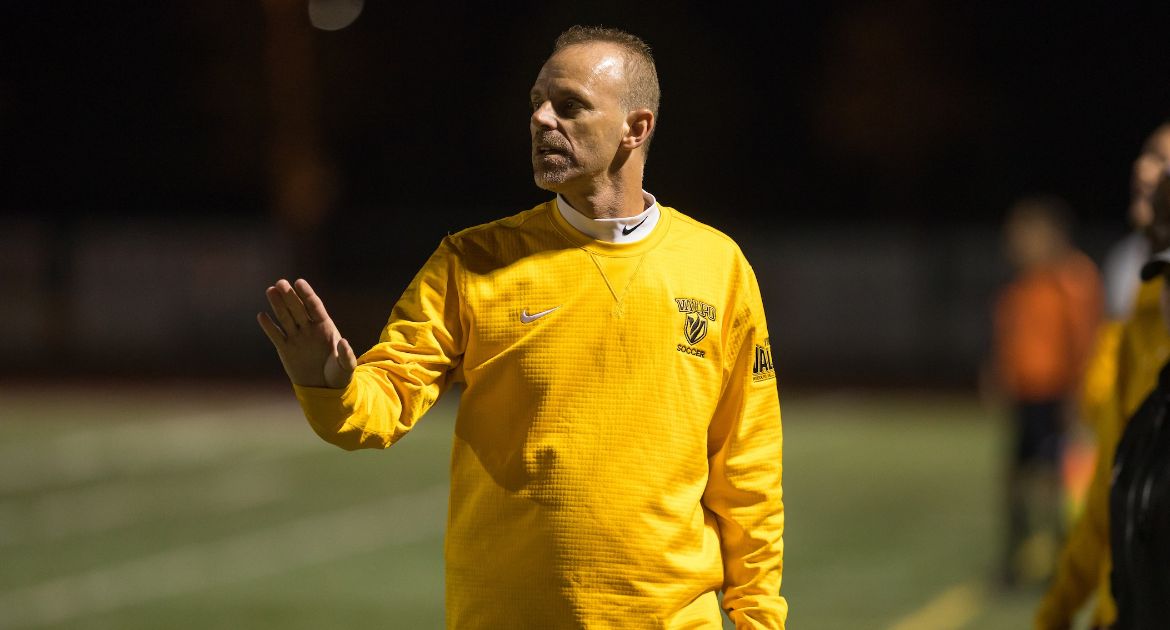 This Week in Valpo Soccer: The Valparaiso University women’s soccer team continues Missouri Valley Conference play on Saturday evening with its first road game of the conference schedule, making the trek to the southwest corner of Indiana to take on Evansville.

Previously: Valpo battled toe-to-toe with defending Missouri Valley Conference regular season champion Drake in both sides’ MVC opener on Sunday afternoon at Brown Field, but the Bulldogs found the golden goal in the 98th minute to come away with the 1-0 victory.

Looking Ahead: Valpo returns home for its final non-conference match of the season, hosting UIC on Wednesday night, before returning to the road to play at Illinois State on Sunday, Oct. 7.

Following the Brown and Gold: Sunday’s match is scheduled for live broadcast on ESPN3. Live stats will be available as well, with links for all the live coverage available via ValpoAthletics.com.

Head Coach John Marovich: The 2014 Horizon League Coach of the Year, John Marovich holds an 94-77-28 (.543) record both overall and with Valpo in his 11th season at the helm of the Brown and Gold. Just the third head coach in program history, Marovich holds Valpo’s all-time records for victories and winning percentage.

Series Notes: Valpo is just 2-9-2 all-time versus Evansville, but six of those losses came in the first six seasons of the Valpo program. Last season, in the sides’ first meeting as MVC foes since Valpo became a full member of the Valley, Evansville earned a 2-1 victory on Brown Field in the regular season finale. Cory Griffith headed home a Grace Rogers free kick in the 23rd minute of that contest to level the match at 1-1, but the Purple Aces scored the match-winner just 82 seconds later.

In Charge for the 200th Time: Head coach John Marovich will be leading Valpo into battle for the 200th time on Saturday night as Valpo takes on Evansville. In his 11th season, Marovich has guided Valpo to 94 wins and seen the Brown and Gold out-score their opposition by a 235-210 margin.

Plenty of Chances: While Valpo has scored just nine goals through its first nine matches this season, it hasn’t been for lack of trying. Valpo is averaging nearly 14 shots per match, totaling 124 shot attempts so far this year - 58 of which have been on goal. Valpo is out-shooting its opponents by better than three shots per fixture and has only been out-shot by its opponents in two of nine matches.

Looking For a Win: Valpo is looking to avoid falling to 0-2-0 in MVC play on Saturday night. The loss in the conference opener to Drake was only the program’s second defeat in a league opener in the last eight seasons and the first since 2013. Meanwhile, Valpo hasn’t started conference play 0-2-0 since 2010.

Multiple Match-Winners: Senior Ava Porlier has made both of her goals this season count, as she has now tallied the match-winning goal in Valpo’s wins over Green Bay and IUPUI - both of which came in the final 10 minutes of regulation. Prior to this year, Porlier had scored in just one match in her career - a two-goal game against Western Michigan in 2016.

The Record-Setting Performance: Senior Cory Griffith broke Valpo’s single-match record by scoring an NCAA D-I season-high four goals in the win over Robert Morris, carrying Valpo to a 4-2 victory. She scored all four of her goals in a 28-minute stretch spanning the two halves, netting a first-half perfect hat trick before closing out her scoring with a 48th-minute goal. Griffith, who is the only player in Valpo history with multiple hat tricks during her career and also broke the program’s single-match record for points, now owns Valpo’s career match-winning goals record with 11.

Bringing in the Honors: With her record-setting performance against Robert Morris came a pair of accolades for Griffith. She was named the MVC Offensive Player of the Week - her first weekly award from a league office since being named Horizon League Offensive Player of the Week on Oct. 31, 2016. Griffith was also named to the Top Drawer Soccer National Team of the Week, the first Valpo player to be represented on the 11-player weekly squad since the website’s inception.

Iron Woman: Junior Ali Quillen made it 838 minutes played this season as she went the full 98 against Drake in the MVC opener, as she has not come off the park in any of Valpo’s nine matches this year. Quillen has now gone the distance in 43 of 47 career matches and is currently on a streak of 1,475 consecutive minutes played.