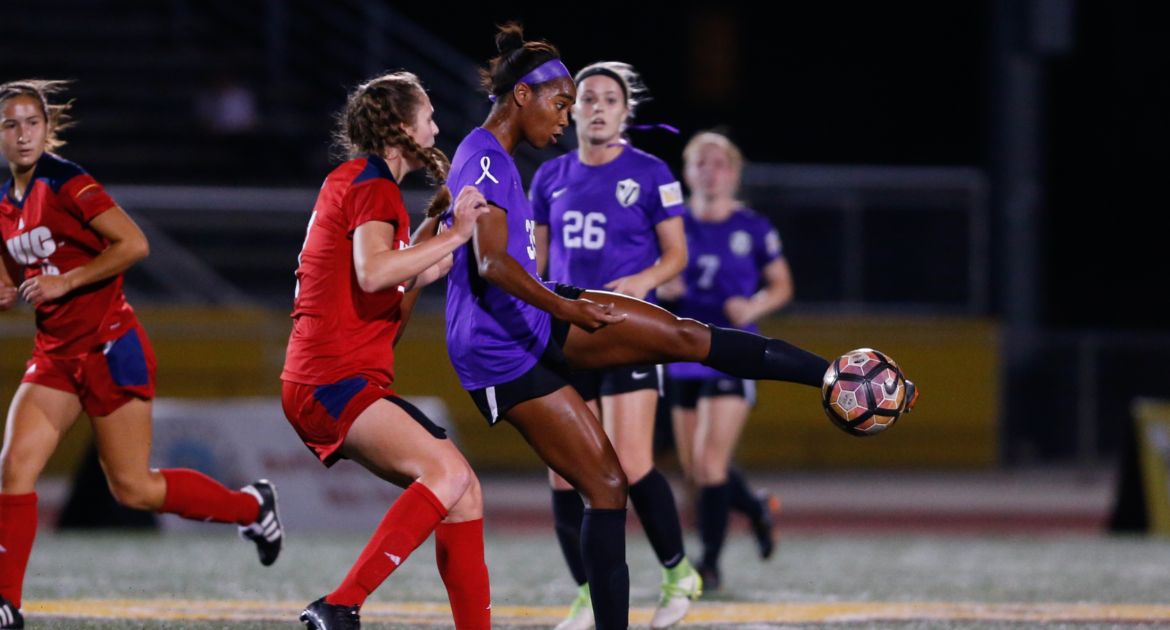 An unseasonably warm evening was the backdrop for the non-conference finale for the Valparaiso University women’s soccer team Wednesday night at Brown Field, as Valpo and UIC played to a scoreless draw.

- Valpo dominated the run of play in the first half, out-shooting UIC in the opening 45 minutes by a 7-1 margin, but neither side was able to find the back of the net.

- Valpo’s best chance in regulation came in the 77th minute, as senior Cory Griffith (Lemont, Ill./Providence Catholic) had an effort from inside the box on track inside the right-hand post before it was stopped by UIC goalkeeper Tara Khayam.

- UIC had a strong opportunity for a golden goal in the 105th minute, as Naomi Rushe sent a hard strike towards goal from the left-hand side of the box. But Valpo goalkeeper Drew Moulton (Sycamore, Ill./Sycamore) was up to the task, making the save to keep it scoreless.

- Just over a minute later, a shot from distance by junior Maria Broecker (Rochester Hills, Mich./Rochester) looked like it had a chance to find the upper 90, but Khayam made a lunging save as the game would soon end scoreless.

- Valpo out-shot UIC for the match, 17-9, and put six shots on goal to the Flames’ three. Valpo has now out-shot its opposition in eight of 11 matches this year.

- Moulton picked up three saves to earn the clean sheet, her second of the season and the sixth of her career.

- Valpo has now surrendered one goal or fewer in each of its last five fixtures.

“It's unfortunate that we don't find the back of the net, and it is something that we're working hard at. It really comes down to timing and patience. I think we're all working so hard to try to make that happen that we're rushing things and we're trying to do too much. We just need to relax and need to slow it down a little bit, be more deliberate with what we're doing, and then I think we'll find the back of the net.”

“It was nice to see that our defense got a clean sheet today. I think they played well, they did a nice job of keeping the game in front of them and this is a definite positive for that group going forward. I'm really happy for Drew to get a shutout, as tonight was an important night for our program to help raise awareness and money for pancreatic cancer research, which has impacted her and her family. She did a great job in goal tonight, and I’m excited that she got the clean sheet.”

Valpo (3-6-2) begins a five-match stretch run in MVC play with a Sunday afternoon contest at Illinois State. Kickoff is set for 1 p.m., and the match can be seen live on ESPN+.