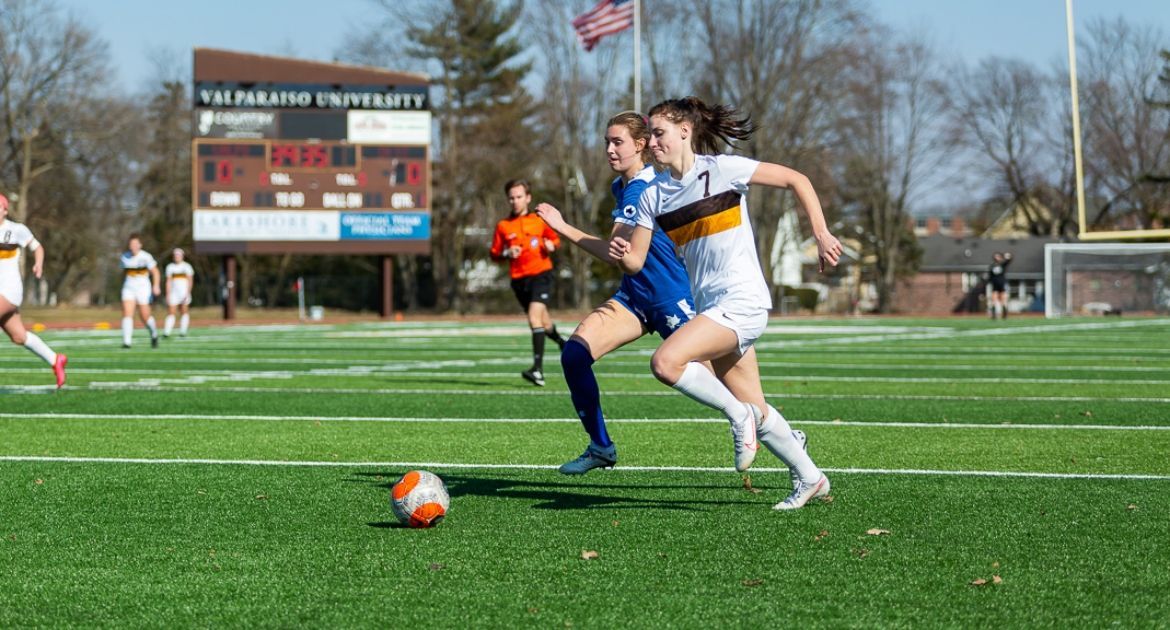 Next Up in Valpo Soccer: The Valpo soccer team hits the halfway mark of the MVC schedule and closes out a three-match homestand as it hosts Drake on Brown Field Friday evening. The matchup pits two of the three sides currently tied for fourth in the MVC standings on four points, although Valpo has a game in hand on Drake.

Previously: Valpo opened this year’s four-match slate at Brown Field with a 2-0 victory over Indiana State on Tuesday, March 9. Last Saturday saw preseason MVC favorite Loyola come in and earn a 1-0 victory over the Brown and Gold.

Next Up: Valpo plays its first match away from home in nearly a month next Wednesday, March 24 as it makes the trip downstate to Evansville.

Following the Brown and Gold: The match against the Bulldogs is slated for broadcast on ESPN+ and will have live stats available via ValpoAthletics.com as well.

Head Coach John Marovich: In his 13th season at the helm of the Brown and Gold, John Marovich holds a 100-97-33 (.507) record both overall and at Valpo as a head coach. The 2014 Horizon League Coach of the Year, Marovich holds Valpo’s all-time records for both victories and winning percentage.

Series Notes: Valpo is in search of the program’s first-ever win over Drake, as the Bulldogs currently own a 6-0-1 advantage in the all-time series. Drake won two meetings during the 2019 season, earning a 3-0 victory during the regular season before picking up a 1-0 win in the first round of the MVC Tournament.

Scouting the Opposition: Drake enters Friday’s matchup at 1-2-1 on the year, with all four of those contests coming in MVC play. After falling to Indiana State (1-0) and Loyola (2-0) to start the season, the Bulldogs have taken four points from their last two games with a 1-0 win over Illinois State and, most recently, a 0-0 draw with Southern Illinois. While Drake has scored just one goal in four games, goalkeeper Kelsie Stone has kept it in games by posting a 0.71 GAA and an .850 save percentage.

Reaching a Milestone: The win over Indiana State was a milestone victory for head coach John Marovich, who earned his 100th win as head coach of the Brown and Gold with the victory over the Sycamores. He became the first Valpo soccer coach - men’s or women’s - in history to reach triple digits in victories on the sidelines. Marovich now owns a career record of 100-97-33 in his 13th season at the helm of the Valpo program, and he was a pair of 52 wins over six seasons as an assistant/associate head coach as well before becoming head coach. Marovich is one of three MVC coaches with 100 or more wins as head coach at their current school (Lindsey Horner, Drake; Rob Brewer-MSU).

Coryell Keeps Making Saves: Freshman goalkeeper Nikki Coryell continued the strong start to her collegiate career last week. She registered the third clean sheet of her rookie season by making three saves in Valpo’s 2-0 win over Indiana State early in the week. Coryell then made six saves and surrendered just one goal against the MVC-leading Loyola side on Saturday. The MVC Defensive Player of the Week Feb. 23, Coryell currently owns a 0.62 GAA and an .857 save percentage with three shutouts in the season’s first six matches.

Dusatko Opens Her Account: While Torhorst has made a habit of scoring goals for the Brown and Gold, freshman Lindsey Dusatko netted the first of what is hoped to be many goals for Valpo in the win over Indiana State. Dusatko, who has started in five of her six appearances this year, notched the insurance goal against the Sycamores early in the second half as beat one defender to the end line and dummied another defender in the box before unleashing a sharp-angle shot for the goal.

The Youth of the Side: Over 30% of Valpo’s minutes played this year have come from freshmen, and four rookies have combined to make 19 starts so far this year. Underclassmen account for 57.7% of the team’s minutes played through the first six matches and have earnd 38 of 66 starting nods.

Starting Streaks: Five players have been a part of the starting XI in all six matches to date this year: seniors Keegan Maris and Kiera Pratt, sophomores Kiley Dugan and Nicole Norfolk and freshman Nikki Coryell. Dugan and Norfolk both started all 18 matches a season ago as well and enter Friday with starting streaks of 24 straight matches.

Iron Woman: Norfolk is quickly joining the ranks of Valpo backs who have played almost every minute of their careers. The sophomore played all 1,659 minutes during her rookie year and has not come off the pitch yet this year, extending her consecutive minutes played streak to 2,239 minutes. Maris has also played all 580 minutes so far this year in the field, and Coryell has seen all the action at goalkeeper as well.