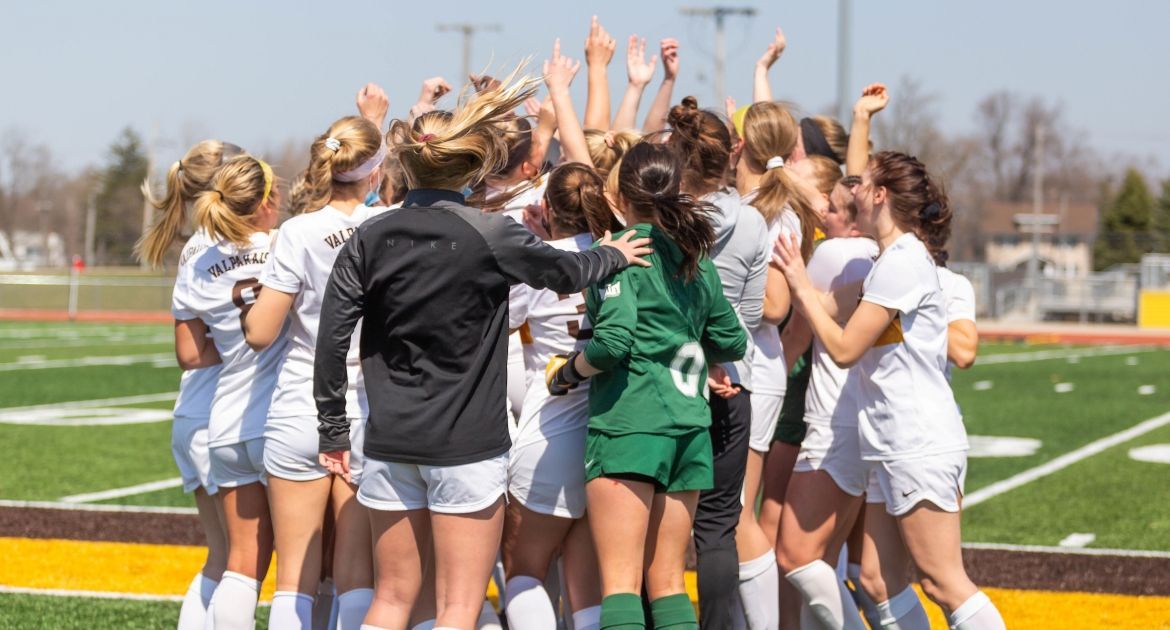 Next Up in Valpo Soccer: Wins in each of their final two regular season matches not only propelled the Valpo soccer team into the MVC Championship, but sent the Brown and Gold into a tie for third place and gave them the third seed for this year’s tournament. With the third seed, Valpo will host sixth-seeded Evansville in first round action on Sunday afternoon from Brown Field.

Previously: Valpo closed the regular season with a pair of victories, winning on Senior Day at Brown Field over Missouri State by a 2-1 final before capping the schedule with a 1-0 triumph at Illinois State.

Next Up: The winner of Sunday’s Valpo-Evansville fixture advances to Wednesday afternoon’s semifinal at second-seeded Indiana State.

Following the Brown and Gold: The first-round tournament match will be broadcast live on ESPN+, with Todd Ickow and Jonas Engler on the call. Links for the live video and live stats will be available via ValpoAthletics.com.

Head Coach John Marovich: In his 13th season at the helm of the Brown and Gold, John Marovich holds a 102-98-35 (.509) record both overall and at Valpo as a head coach. The 2014 Horizon League Coach of the Year, Marovich holds Valpo’s all-time records for both victories and winning percentage.

Series Notes: The Purple Aces hold a 9-3-3 advantage in the all-time series, but have been winless in the last two meetings. This season’s matchup was a 0-0 draw in Evansville on March 24, and the last matchup on Brown Field was a 1-0 Valpo win thanks to a goal from Lauren Torhorst on Oct. 20, 2019. This will be the first meeting between the two sides in postseason play.

Scouting the Opposition: Evansville enters the MVC Championship after going 2-3-2 in Valley play this spring, most recently falling 1-0 at Indiana State. The Purple Aces were the lone Valley team to beat regular season champion Loyola, besting the Ramblers 1-0 in Chicago on April 3. Evansville has scored just two goals in its seven matches, but has surrendered just three goals, as primary keeper Michaela Till owns a 0.47 GAA and a .905 save percentage.

A Strong Regular Season: By closing out the regular season with back-to-back wins, Valpo finished out one of its best regular seasons in recent history. The victories over Missouri State and Illinois State bumped Valpo’s MVC point total to 12 points and moved it into a tie for third place - the program’s highest point total and best finish since joining the Valley. In fact, the third-place regular season finish is the program’s best since winning the Horizon League in 2014. Wednesday’s win secured Valpo’s first season of .500 or better since 2014. Sunday will also mark Valpo’s first home postseason contest at Brown Field since the 2014 Horizon League championship match.

Coryell Holds Firm in Goal: Freshman goalkeeper Nikki Coryell has been called upon to play every minute in goal this season and has been more than up to the task, backstopping a defense which has surrendered just seven goals in 11 matches, including just four goals in Valpo’s eight MVC fixtures. Most recently, Coryell stopped a season-high nine shots - including a key one-on-one save in the 86th minute - for a 1-0 shutout victory at Illinois State to secure the third-place finish. Coryell, who has given up one goal or fewer in 10 of 11 matches this year, enters the MVC Championship second among Valley goalkeepers in GAA (0.59) and shutouts (5) and third in save percentage (.868).

Consistency in the Back: Also contributing to Valpo’s strong defensive numbers this season is the fact that head coach John Marovich has been able to trot out the same back four nearly the entire season. Senior Keegan Maris and sophomore Nicole Norfolk have started all 11 matches this year, junior Peyton Flynn has started each of the last 10 and junior Katie Hansen has been in the lineup each of the last nine fixtures. Notably, none of the four have come off the field at all during MVC play, as all four played all 780 conference minutes.

Playing Every Minute: Maris and Norfolk have taken that one step further, as both - along with Coryell in goal - have played all 1,070 minutes of action this year. For Maris, that is impressive given she entered this season having not played a competitive match in over 2 1/2 years due to injury. Meanwhile, for Norfolk, she has played every minute of her Valpo career, combining for 2,729 minutes played over 29 matches to date. That is the second-longest known streak of consecutive minutes played by a Valpo defender, as Tracy Roos (2008-11) played 3,413 consecutive minutes spanning parts of her final three seasons. However, Roos did not play every minute of multiple seasons, something Norfolk is on track to accomplish.

James Making an Impact: Freshman forward Kelsie James has stood out in the attack for Valpo this season, leading the Brown and Gold in both goals (3) and assists (2). James is tied for third in the Valley in both categories as well. After opening her career with two goals over Valpo’s three non-conference fixtures, James has been a part of three goals in MVC play - all of which have been key tallies. James assisted on the match-winning goal in the win over Indiana State, scored the game-winner in the victory over Missouri State and last time out assisted on the game’s lone goal in the win at Illinois State.

Notching Match-Winners: Four different players have picked up match-winning goals in Valpo’s four victories this year. Senior Tahelah Noel knocked home a 32nd-minute penalty in the 2-1 win over Chicago State, Lauren Torhorst scored in the 41st minute of Valpo’s 2-0 victory against Indiana State, James found the net in the 60th minute in the 2-1 win over Missouri State, and most recently Natalie Graf scored the lone goal in the 1-0 win at Illinois State in the 54th minute.

Many Weekly Honorees: Valpo has had three players combine for five weekly awards from the MVC this season, led by James being named Freshman of the Week on three occasions. James picked up the accolade in each of the season’s first two weeks, and then most recently after scoring the match-winner in the victory over Missouri State. Maris earned Defensive Player of the Week honors in the season’s first week, while Coryell followed Maris the next week as Defensive Player of the Week. Weekly honors for the regular season’s final match are still pending.

Reaching a Milestone: The win over Indiana State was a milestone victory for head coach John Marovich, who earned his 100th win as head coach of the Brown and Gold with the victory over the Sycamores. He became the first Valpo soccer coach - men’s or women’s - in history to reach triple digits in victories on the sidelines. Marovich now owns a career record of 102-98-35 in his 13th season at the helm of the Valpo program, and he was a pair of 52 wins over six seasons as an assistant/associate head coach as well before becoming head coach. Marovich is one of three MVC coaches with 100 or more wins as head coach at their current school (Lindsey Horner, Drake; Rob Brewer-MSU).

The Youth of the Side: One-third of Valpo’s minutes played this year have come from freshmen, and six rookies have combined to make 37 starts so far this year. Underclassmen account for 59.4% of minutes played this season and have earned 69 of 121 starting nods. Of the 14 players who have seen 500 minutes or more of action, five are freshmen and four are sophomores.