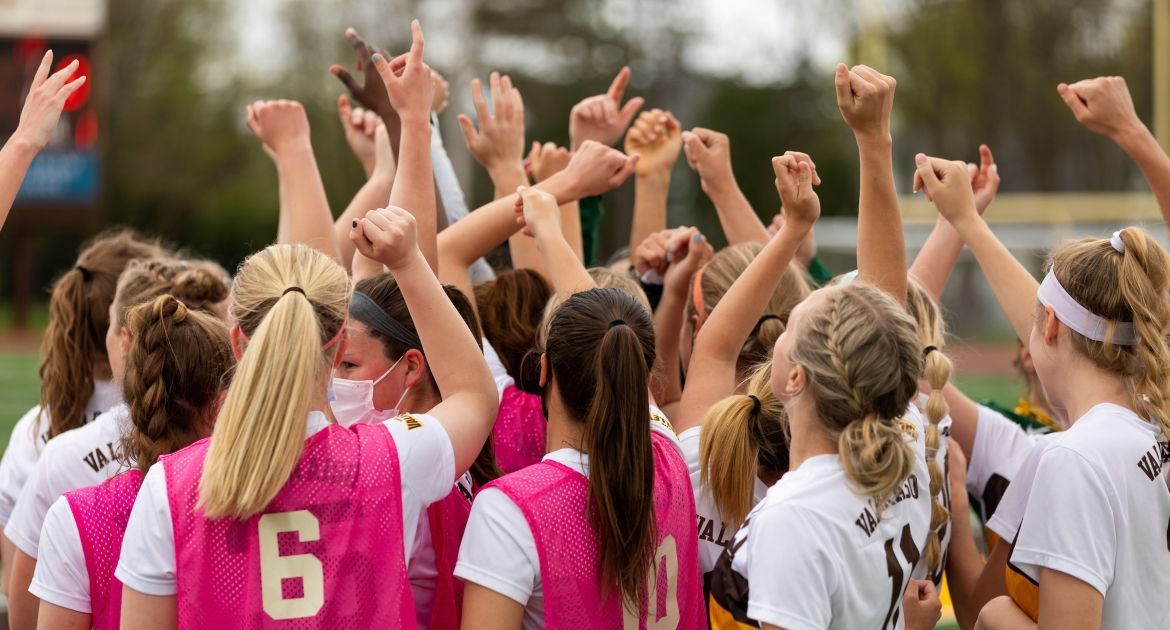 Next Up in Valpo Soccer: After prevailing in a penalty kick tiebreaker over Evansville Sunday to open up MVC Championship action, third-seeded Valpo takes the field Wednesday afternoon for a semifinal match at second-seeded Indiana State. The Brown and Gold are in search of their first-ever trip to the MVC title match.

Previously: Valpo and Evansville played 110 minutes of scoreless soccer in their first-round match to open the MVC Championship at Brown Field on Sunday before Valpo won the penalty kick tiebreaker, 5-3. A miss in the second round by the Purple Aces was the difference, and it was fifth-year senior Tahelah Noel who delivered the winning penalty to advance Valpo in the tournament. Alexis Gaffney, Kiera Pratt, Kelsie James and Natalie Graf also scored penalties for Valpo.

Following the Brown and Gold: The semifinal tournament match will be broadcast live on ESPN+. Links for the live video and live stats will be available via ValpoAthletics.com.

Head Coach John Marovich: In his 13th season at the helm of the Brown and Gold, John Marovich holds a 102-98-36 (.508) record both overall and at Valpo as a head coach. The 2014 Horizon League Coach of the Year, Marovich holds Valpo’s all-time records for both victories and winning percentage.

Series Notes: Valpo owns a 10-3-2 advantage in the all-time series over the Sycamores, a series record which includes a 2-0 victory for the Brown and Gold at Brown Field earlier this season. Lauren Torhorst and Lindsey Dusatko scored for Valpo in that victory, which was the 100th in John Marovich’s head coaching career.

Scouting the Opposition: The second seed for the tournament, Indiana State enters its first tournament match at 6-3-0 overall this year and posted a 6-2-0 record in MVC action. Six different Sycamores have combined for nine goals this season, while in goal, freshman Maddie Alexander has played every minutes and owns a 1.10 GAA.

Advancing to the Semis: Valpo advanced to the MVC semifinals for the first time as a conference member as it prevailed in PKs over Evansville. It is Valpo’s first league tournament semifinal appearance since winning the 2014 Horizon League Tournament. While the result will officially be a draw, it was Valpo’s first non-loss in MVC Championship action - Valpo had previously lost tournament games in 1996, 1997 and 1998 as an affiliate member, and in 2017 and 2019 after joining the conference as a full member.

Coryell Holds Firm in Goal: Freshman goalkeeper Nikki Coryell has been called upon to play every minute in goal this season and has been more than up to the task, backstopping a defense which has surrendered just seven goals in 12 matches, including just four goals in Valpo’s eight MVC fixtures. Most recently, Coryell stopped three shots in Valpo’s first-round tournament match against Evansville, including a key one-on-one stop in the 75th minute. Coryell, who has given up one goal or fewer in 11 of 12 matches this year, enters Wednesday’s matches tied for first among MVC goalkeepers in shutouts (6) and second in goals against average (0.53) and save percentage (.875). Her six clean sheets this year have tied a Valpo freshman record as well.

Consistency in the Back: Also contributing to Valpo’s strong defensive numbers this season is the fact that head coach John Marovich has been able to trot out the same back four nearly the entire season. Senior Keegan Maris and sophomore Nicole Norfolk have started all 12 matches this year, junior Peyton Flynn has started each of the last 11 and junior Katie Hansen has been in the lineup each of the last 10 fixtures. Notably, none of the four have come off the field at all since the start of MVC play.

Playing Every Minute: Maris and Norfolk have taken that one step further, as both - along with Coryell in goal - have played all 1,180 minutes of action this year. For Maris, that is especially impressive given she entered this season having not played a competitive match in over 2 1/2 years due to injury. Meanwhile, for Norfolk, she has played every minute of her Valpo career, combining for 2,839 minutes played over 30 matches to date. That is the second-longest known streak of consecutive minutes played by a Valpo defender, as Tracy Roos (2008-11) played 3,413 consecutive minutes spanning parts of her final three seasons. However, Roos did not play every minute of multiple seasons, something Norfolk is on track to accomplish.

James Making an Impact: Freshman forward Kelsie James has stood out in the attack for Valpo this season, leading the Brown and Gold in both goals (3) and assists (2). James is tied for third in the Valley in both categories as well. After opening her career with two goals over Valpo’s three non-conference fixtures, James has been a part of three goals in MVC play - all of which have been key tallies. James assisted on the match-winning goal in the win over Indiana State, scored the game-winner in the victory over Missouri State and assisted on the match’s lone goal in the win at Illinois State.

Notching Match-Winners: Four different players have picked up match-winning goals in Valpo’s four victories this year. Senior Tahelah Noel knocked home a 32nd-minute penalty in the 2-1 win over Chicago State, Lauren Torhorst scored in the 41st minute of Valpo’s 2-0 victory against Indiana State, James found the net in the 60th minute in the 2-1 win over Missouri State, and most recently Natalie Graf scored the lone goal in the 1-0 win at Illinois State in the 54th minute.

Reaching a Milestone: The win over Indiana State was a milestone victory for head coach John Marovich, who earned his 100th win as head coach of the Brown and Gold with the victory over the Sycamores. He became the first Valpo soccer coach - men’s or women’s - in history to reach triple digits in victories on the sidelines. Marovich now owns a career record of 102-98-35 in his 13th season at the helm of the Valpo program, and he was a pair of 52 wins over six seasons as an assistant/associate head coach as well before becoming head coach. Marovich is one of three MVC coaches with 100 or more wins as head coach at their current school (Lindsey Horner, Drake; Rob Brewer-MSU).

The Youth of the Side: Over one-third of Valpo’s minutes played this year have come from freshmen, and six rookies have combined to make 40 starts so far this year. Underclassmen account for 60% of minutes played this season and have earned 74 of 126 starting nods. Of the 14 players who have seen 500 minutes or more of action, five are freshmen and four are sophomores.