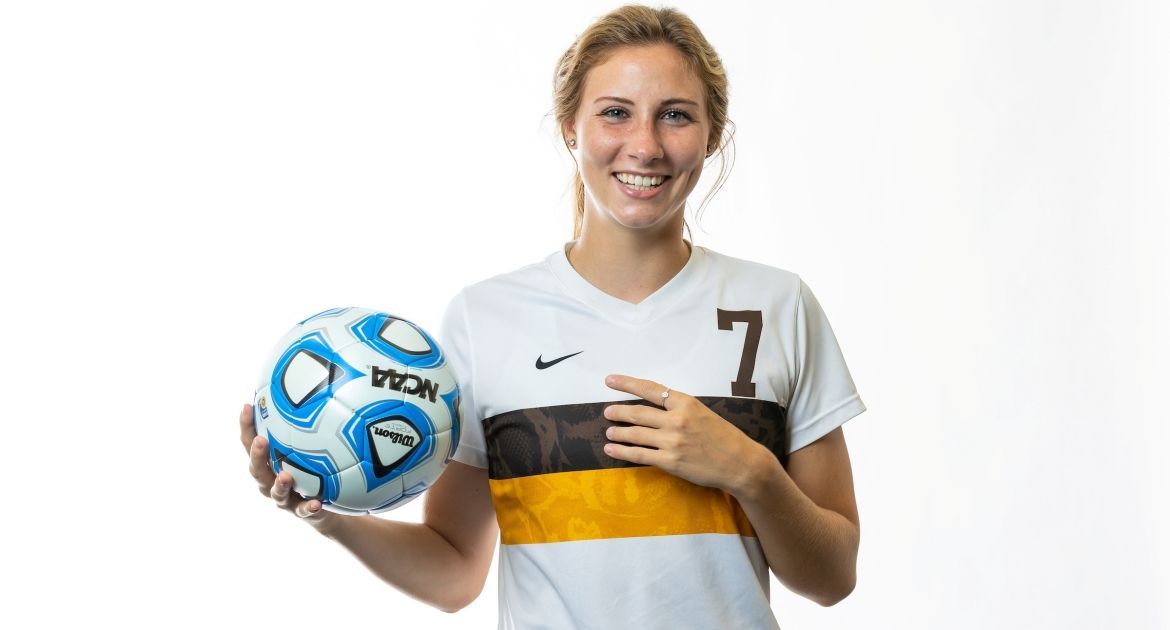 Kiley Dugan is one of four players to start all nine matches so far this year for Valpo.
Valparaiso at Indiana St. | September 24, 2021
Related Links
Related Links

Next Up in Valpo Soccer: Having gotten Missouri Valley Conference play off to a strong start with a win in its conference opener, the Valpo soccer team looks to make it six points over its first two matches on Friday evening when the Beacons make their first road trip of the Valley slate to Indiana State.

Previously: An 83rd-minute header goal off a corner kick by Dana Fish was the difference last Friday evening as Valpo took down Illinois State - which was projected to finish second in the MVC this season - by a 1-0 final. Nikki Coryell made seven saves in goal to help preserve the clean sheet.

Looking Ahead: The Beacons return home to Brown Field for a Wednesday night matchup with Southern Illinois on the 29th.

Head Coach John Marovich: In his 14th season at the helm of the Valpo program, John Marovich holds a 107-103-37 (.508) record both overall and at Valpo as a head coach. The 2014 Horizon League Coach of the Year, Marovich holds Valpo’s all-time records for both victories and winning percentage.

Series Notes: Valpo holds an 11-3-2 advantage in the all-time series over Indiana State. The Sycamores earned their first victory in the series since 2003 in October 2019, but Valpo responded last season with a pair of wins over ISU. The regular season matchup on Brown Field went Valpo’s way by a 2-0 final on goals from Lauren Torhorst and Lindsey Dusatko, and then in a meeting in Terre Haute in the MVC semifinals, Dusatko scored in the 109th minute for the golden goal as Valpo won 1-0 and advanced to the tournament championship match.

Scouting the Opposition: After posting a 6-4-0 overall record and a 6-2-0 record in MVC play during the spring 2021 campaign, Indiana State - which was picked third in the MVC preseason poll - currently sits at 2-6-1 this year. The Sycamores lost their MVC opener at Loyola on a last-second goal, 2-1, but were out-shot 28-2 in that contest. Seven different players have accounted for ISU’s nine goals, with Mackenzie Kent posting a team-high six points (2G, 2A) to date. In goal, Maddie Alexander has played about two-thirds of the minutes and owns a 1.45 GAA and a .763 save percentage.

Starting League Play With Three Points: Valpo earned the best possible start to the MVC schedule in its conference opener last Friday, picking up all three points with the 1-0 win over Illinois State. This is the first time Valpo has taken all three points from its conference opener since its first season as a full MVC member in 2017, when it went down to Missouri State and claimed a 1-0 win.

Three Times This Year: Prior to 2021, Valpo had never played the same program three times in one calendar year. But due to the move of the 2020 season to the spring of 2021, the Beacons will play four programs three times this calendar year, with Indiana State being the first on Friday. Valpo took on Indiana State (2-0-0), Evansville (0-0-2) and Loyola (0-2-0) once apiece in the regular season and in the MVC Tournament in the spring, and faced UNI (0-1-1) twice in the regular season, one of which was a nonconference matchup.

Earning Honors: Freshman Dana Fish was named the MVC Freshman of the Week on Monday after scoring the match-winner in the 1-0 victory over the Redbirds on Friday. Fish is the second Valpo freshman to earn that honor this season, as Abby White picked up the award following Valpo’s games at Duquesne and Robert Morris. After the program had just one Newcomer/Freshman of the Week honoree in its first three full seasons in the MVC, Valpo has five such honorees in the last two seasons.

Back-to-Back Tallies: For Fish, her goal against the Redbirds marked her second consecutive match scoring a goal, as she recorded an insurance tally in the win over Chicago State to close pre-conference play. She is the second Valpo rookie this year to score goals in consecutive games, as Addy Joiner netted goals against St. Bonaventure and Western Illinois. Prior to this year, no Valpo freshman had posted goals in back-to-back fixtures since Vanesa Abad scored in the 2014 regular season finale and Horizon League Tournament semifinal, both against Green Bay.

Getting On the Scoresheet: It was a plethora of firsts at Chicago State in the pre-conference finale for the Valpo attack, as Fish, sophomore Cassidy Eckstein and junior Cierra Welch all found the back of the net for the first time in their respective collegiate careers. It is the first known time in program history that three players have all scored their first collegiate goal in the same match. Of Valpo’s eight goal scorers to date this year, six of them entered the season with zero collegiate goals. Not to be outdone, two other Valpo players also registered their first collegiate point in that match as well - senior Katie Hansen delivered the assist on Fish’s goal, while freshman Peyton Evans picked up the helper on Welch’s insurance tally.

Stepping Up With Saves: Sophomore Nikki Coryell made seven big saves to help secure the 1-0 win over Illinois State in the MVC opener, with all seven of her saves coming with the scoreline still 0-0. Her first complete-game shutout of the year, Coryell now ranks alone in fifth in Valpo history with eight career shutouts.

Always in the XI: Four players have started each of the season’s first nine matches: Kiley Dugan, Nicole Norfolk, Allie Anderson and Abby White. In their third season in the Valpo uniform, Dugan and Norfolk have both started all 41 matches since stepping on campus.