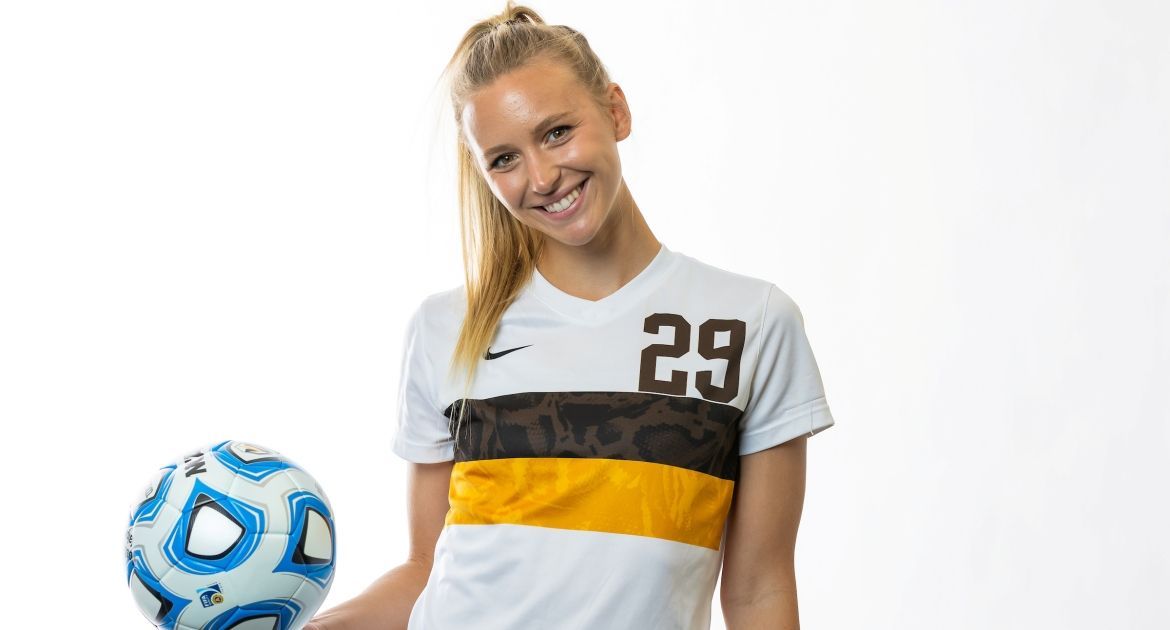 Jenna Schluter is one of five Beacons who will be honored on Senior Night Saturday.
Cornell College at Valparaiso | October 09, 2021
Valparaiso at Drake | October 13, 2021
Related Links
Related Links

Next Up in Valpo Soccer: Winners of five consecutive matches and through the first half of the MVC slate with a perfect record, the Valpo soccer team briefly steps away from conference action on Saturday night as it holds its Senior Night at Brown Field, welcoming Cornell College. The return to Valley play comes next Wednesday with a visit to Drake.

Previously: Valpo reached the halfway mark of the MVC schedule still perfect in conference play as it scored a pair of early goals and went on to a 2-1 victory at Missouri State on Sunday afternoon. Lindsey DuSatko and Kelsie James found the back of the net, while Nikki Coryell made seven saves to earn the win in goal.

Looking Ahead: The Beacons will be back at home on Sunday, Oct. 17 to face off with UNI on Brown Field.

Following the Beacons: Both Saturday’s match and Wednesday’s match will be broadcast live on ESPN3, and both will have live stats available via ValpoAthletics.com. All remaining home matches and select road matches will be carried live on The Valley on ESPN.

Head Coach John Marovich: In his 14th season at the helm of the Valpo program, John Marovich holds a 110-103-37 (.514) record both overall and at Valpo as a head coach. The 2014 Horizon League Coach of the Year, Marovich holds Valpo’s all-time records for both victories and winning percentage.

Series Notes: Cornell College ­- This will be Valpo’s first meeting with Cornell, a Division III school out of Mount Vernon, Iowa. Valpo’s last matchup against a non D-I in regular season play came in the 2017 season opener, a 3-0 victory over Grace College.

Drake - Valpo is in search of its first victory in program history over the Bulldogs, as the all-time series is 6-0-2 in Drake’s favor. One of those draws came this past March on Brown Field, a 1-1 tie featuring a goal from Kiley Dugan.

Scouting the Opposition: Cornell College - The Rams enter Valpo with a 6-5-1 overall record and are 1-0-1 in Midwest Conference action, but had a four-match winning streak snapped last time out as they played to a 1-1 draw with Grinnell. Sanne Cross has scored a team-high four goals, while Elise Thomason-Larsen has seen over 80% of the minutes in goal and owns a 1.19 GAA and a .803 save percentage.

Drake - The Bulldogs currently sit at 5-4-4 overall, but are still looking for their first MVC win, posting a 0-1-2 record in conference so far heading into a Saturday match at Southern Illinois. Libby Helverson has scored four of Drake’s 11 goals and has assisted on two others, while Kelsie Stone owns a 1.05 GAA and an .873 save percentage in goal.

Honoring the Seniors: The Valpo program will honor its senior class prior to Saturday evening’s match. Four of the five seniors - Peyton Flynn, Alexis Gaffney, Morgen Metzger and Jenna Schluter - have spent each of the last four years here at Valpo, while the fifth - Katie Hansen - has played the last three seasons in the Brown and Gold. The group has been instrumental in the program’s success over the last two seasons.

12 Points From Four Matches: With wins over Illinois State, Indiana State, Southern Illinois and Missouri State in its first four MVC fixtures of the season, Valpo has claimed all 12 points possible from the first half of the Valley schedule. Two of the three wins (ILS, INS) have come against two of the three sides picked ahead of the Beacons in the preseason poll, while the Missouri State win came over a team picked right behind Valpo.

Looking Like 2014: The team’s current form is looking a lot like the program’s 2014 campaign, when it posted a perfect 8-0-0 mark in Horizon League play. Valpo has won five matches in a row, its longest winning streak since winning 12 in a row in 2014. The Beacons have won four consecutive road matches, their longest winning streak in true road matches since winning seven straight as the visitor in 2014. Dating back to last season, the program has won six straight regular season MVC matches, its longest winning streak in league regular season play since the 2014 side won all eight Horizon League matches. Even the number of players who have scored match-winners this year - six - is the most since the 2014 squad had seven different players tally game-winning goals.

WWWWW: The win over Missouri State was the Beacons’ fifth victory in a row, just the sixth time in program history Valpo has won five or more consecutive matches. Besides the record 12-match winning streak in 2014, the 2000 (six), 2004 (five), 2006 (eight) and 2009 (seven) sides each had a winning streak of at least this length.

Shutout Streak: While the team’s run of clean sheets came to an end on Sunday when Missouri State found the back of the net, the Beacons did put together a string of four straight shutout victories. Prior to this year, you have to go back to 2009 to find the last time Valpo won four in a row, all in shutout fashion — that season saw the Brown and Gold hold five straight opponents scoreless in wins late in the season. The goal the Bears scored was the first Valpo has allowed in MVC play this season and broke a streak of 419 consecutive minutes of shutout soccer.

Getting on the Board Early: In stark contrast to their first three wins in MVC play, all of which required goals late in regulation or in extra time, the Beacons jumped on top early Sunday with goals in the 13th and the 18th minutes. Valpo netted a pair of goals inside of 20 minutes for the first time since knocking home three in the first 18 minutes against Chicago State in September 2017.

Coryell Earns Weekly Honor: After backstopping the Valpo defense to a pair of victories last week, surrendering just one goal over two matches, goalkeeper Nikki Coryell was selected Monday as the MVC Defensive Player of the Week. Coryell made five saves in Valpo’s shutout of Southern Illinois, and followed with seven saves in the 2-1 win at Missouri State, none bigger than a leaping save to her right in the 75th minute to preserve the one-goal edge. Coryell currently ranks third in the MVC in GAA (0.99) and second in save percentage (.843), and has given up just one goal in four Valley matches. She is the sixth different Beacon to earn weekly honors from the MVC office this season.

Another One For James: Sophomore Kelsie James knocked home a penalty kick for the second straight match last time out at Missouri State, a tally which eventually ended up being the match-winning goal. The goal kept her tied atop the MVC goal-scoring chart, as it was her team-high sixth of the season. James now has nine goals and five assists in one-and-a-half seasons in the Valpo uniform.

A Season of Firsts: In her 55th career match in the Brown and Gold, senior Morgen Metzger delivered the pass for the assist on Dana Fish’s match-winner against SIU - her first career assist. That continues a trend for the Beacons this season, as six of Valpo’s eight goal scorers entered the year without a collegiate goal, while six of nine players who have tallied an assist did so for the first time.

Always in the XI: Three players have started each of the season’s first 12 matches: Kiley Dugan, Nicole Norfolk and Abby White. In their third season in the Valpo uniform, Dugan and Norfolk have both started all 44 matches since stepping on campus.