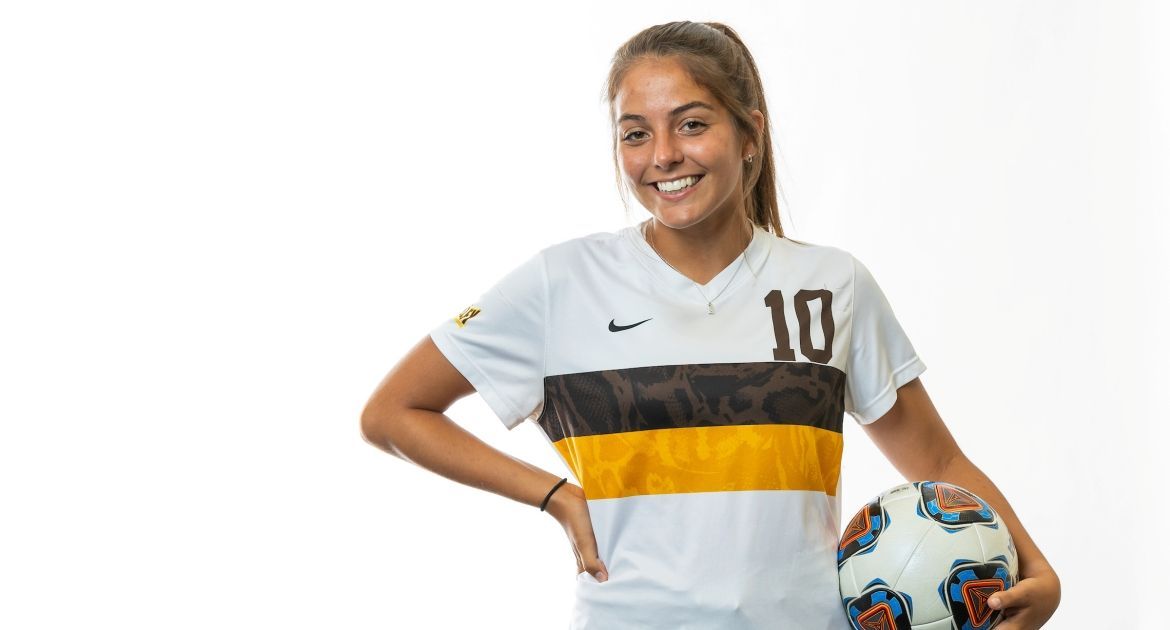 Next Up in Valpo Soccer: Everything is on the line Thursday afternoon in Rogers Park. Valpo makes the trip to Chicago tied with Loyola in the MVC standings, with the winner claiming the conference regular season title, while a draw means the two squads would share top billing atop the final table. Valpo is in search of its first team championship since joining the Valley.

Previously: It was a victorious ending to the regular season home schedule at Brown Field Saturday night for Valpo, as sophomore Kelsie James scored a brace which held up for a 2-1 victory over visiting Evansville. The victory extended the Beacons’ unbeaten streak to nine consecutive matches and gave the team its 10th win of the season.

Looking Ahead: Next up for Valpo will be the semifinal match of the MVC Tournament next Friday, Nov. 5. The Beacons would face a winner of a first-round fixture.

Following the Beacons: Thursday’s match will be broadcast live on ESPN+ and will have live stats available via ValpoAthletics.com. All remaining matches will be carried live on The Valley on ESPN.

Head Coach John Marovich: In his 14th season at the helm of the Valpo program, John Marovich holds a 113-103-38 (.520) record both overall and at Valpo as a head coach. The 2014 Horizon League Coach of the Year, Marovich holds Valpo’s all-time records for both victories and winning percentage.

Series Notes: By far Valpo’s all-time opponent, the Beacons will be matching up with Loyola for the 31st time Thursday - Valpo’s second-most common opponent is Green Bay, with 22 meetings. The Ramblers hold a 20-9-1 advantage in the series. Valpo won the first meeting as MVC opponents, a 2-1 win in Chicago in early October 2017, but Loyola has won five since. The Ramblers’ five-match winning streak includes matching 1-0 victories in the regular season and in the MVC Tournament title match this past spring.

Scouting the Opposition: Loyola enters Thursday’s title tilt at 10-2-2 overall and has matched Valpo’s 6-0-1 record in conference to date - the Ramblers’ sole blemish in MVC play has been a scoreless draw with Missouri State. Reigning MVC Player of the Year Megan Nemec has scored a team-high six goals and has dished out six assists - her 18 points rank only behind Kelsie James among MVC players. The Ramblers’ defense has surrendered just 36 shot attempts in 14 matches this season, and goalkeeper Maddie Hausmann leads the Valley with a 0.62 GAA.

For All the Marbles: Thursday’s regular season finale at Loyola has it all on the line for the Beacons and the Ramblers, as the two sides enter the match both with 19 points (6-0-1) in MVC play. Valpo needs a win to earn the 1 seed and hosting rights for the MVC Tournament, as Loyola enters the final match day with the goal differential tiebreaker advantage. The last time that the final match day of the MVC regular season featured:
- 1 vs. 2 in the standings meeting with the title on the line: 2011, 4-1-0 Illinois State vs. 4-0-1 Creighton
- A matchup of two unbeaten teams in conference play: 2004, 6-0-0 Drake vs. 3-0-3 Creighton
- A matchup of two unbeatens in conference, both of which could win the title: 2001, 5-0-0 Illinois State vs. 4-0-1 Evansville

Unbeaten Streak Continues: The Beacons extended their unbeaten streak to nine consecutive matches (8-0-1) with Saturday’s win over Evansville, the second-longest such streak in program history. Only the 2014 side, which went 18 straight without a defeat, had a longer stretch without losing. The first seven matches in the current streak were all wins, tying the 2009 team for the third-longest winning streak in program history.

Getting Defensive: Valpo’s current nine-match unbeaten streak has included seven clean sheets, with only Missouri State and Evansville putting away a goal against the Beacons during this stretch. The first four wins in the unbeaten streak all came via shutout — prior to this year, you have to go back to 2009 to find the last time Valpo won four in a row, all in shutout fashion. Valpo put together a streak of 419 consecutive minutes of shutout soccer between Sept. 10 and Oct. 3, and had a 408-minute shutout streak snapped last time out when the Purple Aces scored in the 72nd minute. Thanks to their defense during this stretch, the Beacons have not trailed in a match since their Sept. 10 loss to Western Illinois.

Double-Digit Wins: Saturday’s win gave Valpo 10 wins on the season, the 10th time in program history the squad has reached the 10-win mark. This is the fifth time Valpo has won at least 10 matches under head coach John Marovich.

Regionally Ranked: For the third consecutive week, Valpo has moved up in the United Soccer Coaches Midwest Region rankings. The Beacons broke into the regional rankings at #10 on Tuesday, Oct. 12, moved up one position to #9 last week and came in at #8 in the most recent rankings. This year’s side is the first Valpo squad to be ranked since the 2017 team was ranked for the first three weeks of that season - back then, 15 teams were ranked, while only 10 are ranked now.

A Brace For James: Sophomore forward Kelsie James continued her stellar season on the attack last time out against Evansville, finding the back of the net twice in the game’s first 30 minutes for both of Valpo’s goals in the 2-1 win. She now has five goals and three match-winners in MVC play. James, who was named MVC Player of the Week on Monday, leads the Valley with nine goals and 21 points this season - both marks tied for seventh-best in program history. James is trying to become the first Valpo women’s soccer player to lead the conference in goals in program history.

Raking in the Honors: Valpo has set a program record for number of conference weekly honors this season, with James’ award this week the ninth this year, spread among seven different athletes. In addition to James’ pair of Player of the Week honors, fellow sophomore Lindsey DuSatko has also been named Player of the Week. Addy Joiner, Dana Fish and Abby White have been Freshman of the Week honorees, while Nikki Coryell (2x) and Nicole Norfolk have earned Defensive Player of the Week accolades.

Coryell Keeps Goals Out: Sophomore goalkeeper Nikki Coryell has been a brick wall in goal for Valpo throughout her career and has taken her game to another level in MVC action this year. The MVC Goalkeeper of the Year this past spring, Coryell has posted five clean sheets in the Beacons’ seven conference fixtures, and owns a miniscule 0.27 GAA and a .951 save percentage in conference play. Overall this year, she ranks second in the Valley in both GAA (0.84) and save percentage (.865). Her numbers in conference play look even better when you consider that, of the 654:35 played in conference so far, Valpo has been tied for 471:37 (72% of the minutes) and owned a mere one-goal edge for 120:10 (18.4% of the minutes).

Coryell on the Charts: With at least two matches left this year, Coryell has already cracked Valpo’s single-season shutout top-10 with her five clean sheets this season. She now owns 12 career shutouts, fifth-most in program history and just two shy of fourth. Nine of her clean sheets have come in the 15 MVC matches she has played. Coryell surpassed the 2,500-minute mark for her career earlier this season, meaning she now qualifies for career goals against average charts as well. Her 0.68 GAA to date in her career is easily best in Valpo history, besting Sydney Galvez-Daley’s 0.80 mark, and she currently ranks second in MVC history as well.

Finding Goals Late: Four of the Beacons’ six wins in the MVC have come courtesy of a match-winner in the 70th minute or later. The winner against Illinois State (Dana Fish) came in the 83rd minute, against Indiana State (Lindsey DuSatko) came in extra time, against Southern Illinois (Fish) came in the 75th minute and against Drake (James) came in the 72nd minute. The only exceptions were the match at Missouri State, when Valpo netted two goals before 20 minutes were up, and the win over Evansville last time out, when Valpo scored twice in the first 30 minutes.

Trio of Firsts: The trio of Gaffney, Metzger and Claire Bonnici all scored their first collegiate goal in the Cornell College win, the second time this season Valpo has had three first-time goal scorers in the same match. The Sept. 12 win over Chicago State featured the first collegiate goals for Cassidy Eckstein, Dana Fish and Cierra Welch. Prior to this season, Valpo had never had three players net their respective first career goals in the same match.

Always in the XI: Three players have started each of the season’s first 16 matches: Kiley Dugan, Nicole Norfolk and Abby White. In their third season in the Valpo uniform, Dugan and Norfolk have both started all 48 matches since stepping on campus.