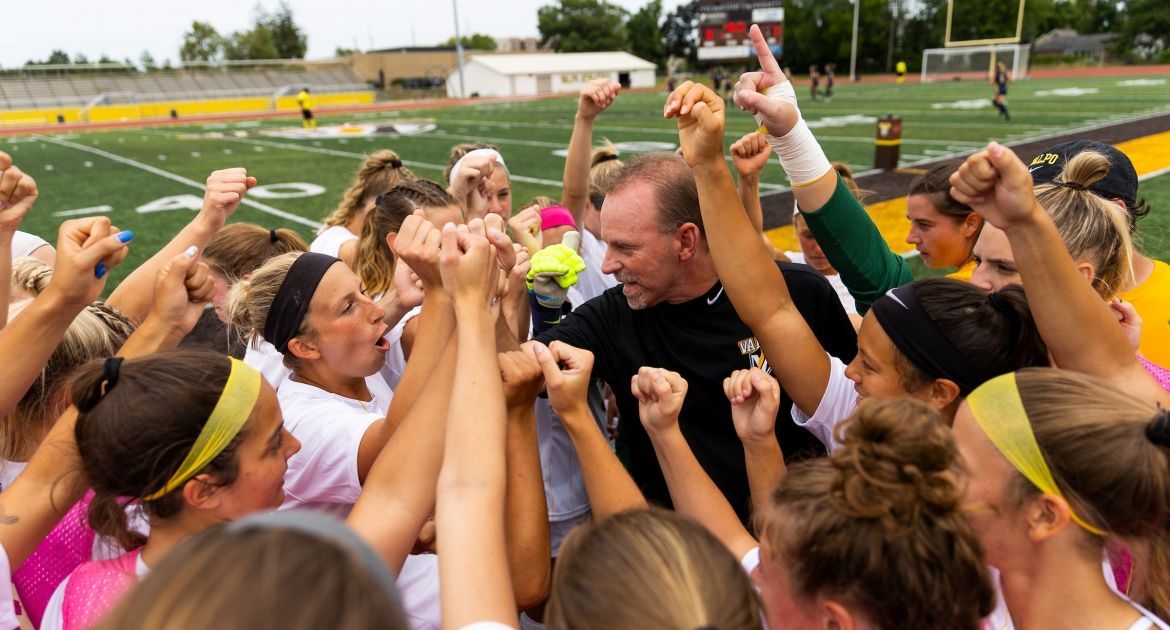 Next Up in Valpo Soccer: The Valpo soccer team opens the 2022 Missouri Valley Conference slate this weekend, heading west to Cedar Falls, Iowa to take on UNI Saturday afternoon.

Previously: The Beacons fell in their final two nonconference matches of the 2022 campaign last weekend, dropping a 1-0 decision to Purdue Fort Wayne and a 3-0 final to Bowling Green.

Looking Ahead: Valpo returns to Brown Field for its next two matches, as the Beacons will host UIC on Thursday, Sept. 22 and Drake on Sunday, Sept. 25.

Head Coach John Marovich: In his 15th season at the helm of the Valpo program, John Marovich holds a 114-110-40 (.508) record both overall and at Valpo as a head coach. The 2014 Horizon League Coach of the Year, Marovich holds Valpo’s all-time records for both victories and winning percentage.

Series Notes: The all-time series between Valpo and UNI stands even, as the two sides are 4-4-2 against each other. Valpo is just 1-3-2 against the Panthers since joining the MVC, however, and is in search of its first win over UNI since the 2019 season. Last season, the two squads battled to a scoreless draw on Brown Field, a result which snapped a seven-match winning streak for the Beacons.

Scouting the Opposition: UNI enters Saturday’s match at 3-3-1 on the season, but has dropped its last three matches after a 3-0-1 start to the campaign. Most recently, the Panthers fell 6-0 to Iowa on Sunday. Saturday’s fixture will be UNI’s eighth straight at home. Lauren Heinsch and Allison Whitaker have both scored two of the Panthers’ nine goals, while Sydney Burskey (1g, 3a) has a team-high five points.

Looking For Conference Success: With the start of MVC play this weekend, Valpo is looking to build on its success within conference play over the last two seasons. Since the start of the spring 2021 campaign, the Beacons are 9-3-4 within regular season MVC matches - a mark which improves to 9-1-4 with the removal of the two Loyola matches. In fact, Valpo’s first conference opponent - UNI - is the only current MVC opponent which has beaten the Beacons over the last two regular seasons.

Find the Back of the Net: Valpo is looking to snap a scoreless streak which currently sits at 286 minutes, the program’s longest since the 2019 side played 346 consecutive minutes without scoring early in the season. The final piece has been the only downfall on the attack, however, as the Beacons are generating plenty of chances. Valpo is averaging nearly 15 shots per game, a mark which is nearly four shots per game more than its opponents. And the Beacons have put plenty of chances on goal as well, only to run into career games from opposing goalkeepers - in fact, the .940 save percentage by Valpo’s opponents would currently rank fourth nationally in save percentage by a team.

The First Time: Five newcomers have seen their first action in the Valpo uniform this season, most recently Kennedy Hill on Sept. 4 at Ball State. In addition, five different players have earned their first career start at Valpo this year, most recently fifth-year transfer Andrea Garcia last time out on Senior Day versus Bowling Green.

Always in the XI: Three players started all 18 matches for Valpo a season ago: Kiley Dugan, Nicole Norfolk and Abby White. White did not play against Chicago State, snapping a string of 22 consecutive starts to begin her collegiate career. In their fourth season in the Valpo uniform, Dugan and Norfolk have both started all 58 matches since stepping on campus.