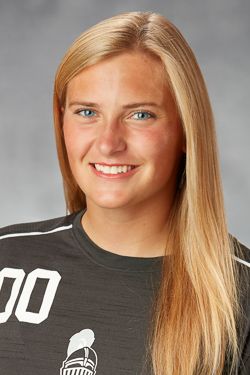 2018: Did not see any game action in her first year at Valpo.

2016-2017 (University of Illinois Springfield): Started 30 games in goal for the Prairie Stars over her first two years of collegiate soccer ... posted an 11-15-4 record with a 1.30 GAA and a .786 save percentage ... registered eight shutouts over her two seasons ... made a career-best 12 saves against Rockhurst as a freshman ... named GLVC Player of the Week Oct. 30, 2017 for the final regular season performance of her sophomore year, following a nine-save shutout of Rockhurst which propelled UIS to its first-ever GLVC Tournament berth.

Prep: Four-year letterwinner ... helped lead Pewaukee to a conference title and a berth in the sectional finals as a senior ... named a Scholar-Athlete ... also earned three letters apiece in tennis and basketball, and was a First Team All-Conference perfomer on the tennis courts.