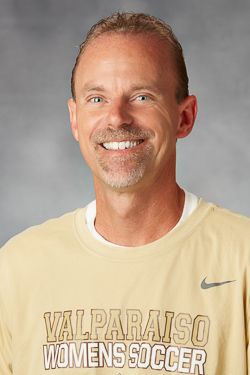 John Marovich was named the third head coach in the history of the Valpo women’s soccer program in January of 2008, following six seasons as an assistant and associate head coach on the bench. The 2014 Horizon League Coach of the Year, he enters his 14th season at the helm of Valpo in the fall of 2021.

Marovich enters the fall 2021 campaign with a record of 103-99-36 both overall as a collegiate head coach and at Valpo. He holds Valpo's all-time records for victories and winning percentage (.508).

The spring 2021 season saw Marovich lead Valpo to its best season since joining the Missouri Valley Conference. Valpo posted a 5-4-5 overall record and was 3-2-3 in MVC regular season play, earning a third-place finish in the regular season standings. Along the way, Marovich became the first coach in program history to reach the 100-win mark on the sidelines at Valpo, doing so with a March 9 win over Indiana State.

The Brown and Gold went on to advance to the MVC Tournament championship match for the first time in program history. Marovich coached the MVC's Goalkeeper of the Year in Nikki Coryell, as well as two additional First Team All-MVC honorees in Keegan Maris and Kiley Dugan - both of whom were United Soccer Coaches All-Region selections as well. Maris was also named a Third Team CoSIDA Academic All-American and a United Soccer Coaches Third Team Scholar All-American. Valpo finished the campaign with the fewest goals surrendered in a single season in program history (8) and a team GAA of 0.52, third-best in program history.

Marovich led the Brown and Gold as they transitioned into the MVC in 2017. Valpo posted a 9-10-0 overall record and a 3-4-0 record in MVC play while making the leap from the nation's 28th-ranked conference by RPI (Horizon League, 2016) to the nation's 12th-ranked conference (MVC, 2017). Led by the efforts of First Team All-MVC and Third Team All-Region honoree Cory Griffith, the 2017 side finished the season 57 spots higher in the RPI than the 2016 squad. Marovich also coached the program's fourth CoSIDA First Team Academic All-American all-time, as senior Grace Rogers earned the honor.

Marovich led Valpo to nine victories in 2016, as he surpassed former head coach Stephen Anthony for the program's all-time wins record. Marovich matched Anthony's mark of 78 wins with a victory over Morehead State on Sept. 18, and then two matches later, broke the record with a victory against Milwaukee Sept. 28.

Marovich and Valpo won seven matches in 2015, including a 4-2-2 mark on their home pitch at Brown Field. Three players earned All-League accolades, while Rita Craven and April Cronin both repeated as NSCAA All-Region honorees. In addition, Craven and Jenny Fassbinder were both selected as CoSIDA First Team Academic All-Americans.

Marovich led Valpo in 2014 to the most successful season in program history. The team set new school records with 14 wins, a 12-match winning streak and an 18-match unbeaten streak, ending the season with a 14-2-4 record. Along the way, the side swept through Horizon League play with a perfect 8-0-0 record - only the third side in league history to go 8-0-0. Valpo won its first Horizon League regular season and tournament championships in 2014 and advanced to the NCAA Tournament for the second time.

Individually under Marovich in 2014, numerous players earned accolades, highlighted by the selection of Rita Craven as an NSCAA Third Team All-American - the first All-American in program history. Craven was also an NSCAA First Team Scholar All-American, the first in program history as well, and is the only player in Valpo women's soccer history to be named league Player of the Year. A quartet of players earned NSCAA All-Great Lakes Region honors, while Jenny Fassbinder was an NSCAA Third Team Scholar All-American.

Under Marovich, Valpo has cemented itself as a top-tier defensive side, as all five of the top defensive seasons in program history have come during his tenure. In 2013, Marovich's squad surrendered just 15 goals, while 2012 saw Valpo earn the first national statistical championship in program history en route to a 10-win campaign, as its team goals against average of 0.51 paced the nation. Valpo also ranked among the top-ten squads in the nation in both shutout percentage and save percentage.

Marovich guided the Brown and Gold to the Horizon League Tournament championship match in 2009 as Valpo finished the year 11-9-1 overall while placing third during the regular season, its highest finish to that point in the Horizon League since joining the conference prior to the 2007 season. The 11 wins were third most in school history. Valpo matched its third place finish again under his guidance in 2011.

In 2008, his first season at the helm of the Brown and Gold, Marovich’s squad finished 10-6-3 overall while setting a new school record with 10 shutouts on the season. His team also set a then-school record for lowest goals against average in a season, 0.71, and posted a 7-2-1 record at home.

During his time as head coach at Valpo, Marovich has had 14 players earn First Team All-Conference honors, while 14 others have been Second Team All-League picks. Marovich also has had 19 All-Newcomer Team/All-Freshman Team selections under his guidance.

His teams also have had success in the classroom, as 19 student-athletes have been voted to conference All-Academic/Scholar-Athlete Teams. In addition, he has coached four CoSIDA First Team Academic All-Americans (Jackie Kondratko - 2009; Rita Craven and Jenny Fassbinder - 2015; Grace Rogers - 2017), while a total of 10 players have earned Academic All-District V accolades, including nine First Team selections. Kondratko was also named the Horizon League’s Cecil N. Coleman Award winner in 2010, an honor given to the league’s overall top male and female senior student-athlete across all sports.

Marovich joined the Valparaiso University coaching staff as an assistant coach prior to the 2002 season. After serving in this role for Valpo for his first three years with the program, he was promoted to associate head coach, where he assumed a full-time role prior to the 2005 season.

In 2007, Marovich was an assistant on the Valpo coaching staff as Valpo moved into the Horizon League. During the first season in the new conference, he helped Valpo post a 10-9-0 record, finishing fifth in the highly competitive league. The Brown and Gold also had three student-athletes earn All-Horizon League honors, with two Second Team picks and an All-Newcomer Team selection.

Marovich also was instrumental in Valpo's success in both 2005 and 2006. The Brown and Gold won both the Mid-Continent Conference regular season and tournament titles in 2005, setting a new school record for victories with 12, as well as posting the best winning percentage at the time in the program’s history. Valpo earned its first berth ever to the NCAA Women’s Soccer Championship, traveling to Notre Dame, a team Marovich spent time assisting prior to arriving at Valpo.

The next season, 2006, Marovich was a part of the program's first outright regular season Mid-Continent Conference title in school history, as Valpo again won 12 matches, while also setting a new mark for winning percentage in a season at .711.

In his first five seasons on the bench for the Brown and Gold, Valpo earned four Mid-Continent Conference Tournament berths, advancing to the title match in 2004 in addition to winning the championship in 2005.

Marovich arrived at Valpo after spending the 2001 season as a women’s volunteer assistant coach at the University of Notre Dame, helping lead the Fighting Irish to the Big East regular season and tournament championships. During Marovich’s stay, Notre Dame also advanced to the second round of the NCAA Tournament.

Before moving to the collegiate field, Marovich was the head girls’ coach at Andrean High School, where he led the 59ers to the state title match in 1999. In his seven seasons at Andrean, he won two conference titles and three sectional championships, as well as a regional and semi-state title. Marovich was named the National Soccer Coaches Association of America’s Indiana private/parochial school state Coach of the Year in 1999.

Marovich has earned his United States Soccer Federation “A” License. He played collegiate soccer at Purdue-Calumet, where he received his Bachelor of Science degree in construction technology in 1994. He also serves as an Olympic Development Program age group head coach in the state of Indiana and is also a staff coach for Region II.