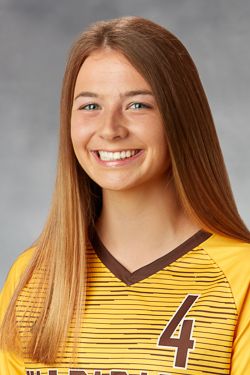 2017: Saw action in all 19 matches as a sophomore for Valpo, starting 18 times ... part of the Crusaders' starting XI in each of the final 17 matches ... played a total of 1,332 minutes ... named to the All-Tournament Team at Florida Atlantic's Owl Classic for her efforts against FGCU and FAU on Aug. 25 and 27, respectively ... scored equalizing goal early in second half of eventual win at Fort Wayne Sept. 10 ... picked up an assist in MVC play at Drake Sept. 30 ... finished season with 22 shot attempts, 11 of which were on goal.

2016: Appeared in 18 matches as a rookie for the Crusaders, starting seven times ... played a total of 803 minutes on the year ... scored first career goal off the bench against Kansas Sept. 4 ... assisted on match-winning goal in Horizon League play at Green Bay Oct. 1 ... totaled 14 shot attempts for the season, placing four on goal.

Prep: A three-year letterwinner for the Royal Lions ... a two-time All-Sectional and All-Conference selection ... helped the Royal Lions to regional, sectional and super-sectional championships in 2013 before a fourth-place finish in the state tournament .. member of the Illinois state ODP team and the regional ODP pool ... played club soccer for 2013 USYSA national champions Eclipse Select before playing the last two seasons for the FC Wisconsin Eclipse ECNL team ... also earned one letter in track and field ... member of National Honor Society.