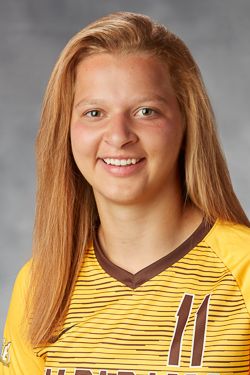 2017: Saw action in 17 matches for Valpo, starting on five occasions ... Crusaders went 4-1-0 in her five starts, including a pair of wins in MVC play ... played a total of 673 minutes, going the final 90 minutes in the Crusaders' win in their MVC debut at Missouri State Sept. 23 ... recorded a pair of assists off the bench in Sept. 28 victory over Chicago State ... tallied three shot attempts on the year.

2016: Appeared in 16 matches as a redshirt freshman for the Crusaders, starting six times ... named to the Horizon League All-Freshman Team ... finished season with five points on two goals and an assist ... played total of 474 minutes on the year ... debuted with start in season opener Aug. 19 at IUPUI ... scored first two career goals in a five-minute span late in second half Sept. 11 at regionally-ranked Western Michigan to force overtime ... named Horizon League Offensive Player of the Week Sept. 12 for her effort against the Broncos ... registered assist in Horizon League play versus Detroit Mercy Sept. 24 ... tallied eight shot attempts, seven of which were on goal ... member of Horizon League Academic Honor Roll.

2015: Did not see any action in first year at Valpo ... maintained four seasons of eligibility.

Prep: A four-year letterwinner for the Mustangs ... an All-State selection as a senior ... twice earned All-Area honors and was a three-time All-Conference choice ... helped Downers Grove South to a third-place finish in 2012 state tournament ... also a four-year letterwinner in basketball ... named school's Female Athlete of the Year as a senior ... played 10 years of club soccer, including her final two years at Chicago Inter ... helped that squad to the MRL title in 2014 and a third-place finish at the Disney Showcase.

Personal: Ava is the daughter of Mark and Catherine Porlier ... majors are biology and chemistry.