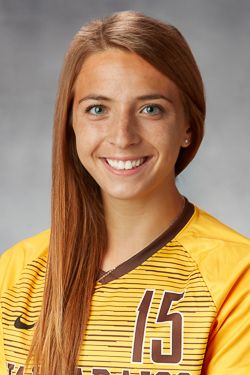 Prep: A four-year letterwinner for the Pirates ... helped lead Rocky River to an unbeaten record and an OHSAA state title in 2013 as a junior ... Second Team All-District honoree as a senior ... twice earned All-Conference honors as well ... helped Rocky River to four sectional, three district and two conference titles ... integral part of back line as a junior in 2013 which set school records for most shutouts and lowest GAA ... played her club soccer for Cleveland FC ... was a member of the State Cup champion team in 2014, as well as a State Cup finalist in 2012 and semifinalist in 2011 ... part of the USYSA Regional Cup semifinalist team in 2013 as well ... a three-year player for the Ohio North ODP team ... named to the Class of 2015 Girls IMG Academy 150 Players Poll in September of 2013 ... member of National Honor Society.

Personal: Eva is the daughter of Christopher Schneider and Christina Laursen ... major is nursing.