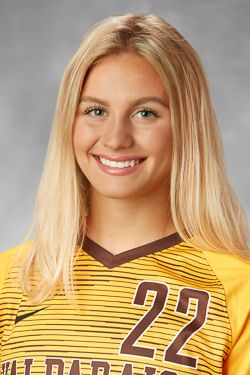 2018: Saw action in 14 matches off the bench as a junior ... played 290 minutes, including a season-high 40 minutes versus Robert Morris Sept. 2 ... recorded first career goal late in first half Oct. 8 at Illinois State, an insurance tally in Valpo's 2-0 win ... finished year with three shots, two of which were on goal.

2017: Appeared in four matches off the bench for the Crusaders ... played total of 102 minutes, including 63 minutes in Sept. 28 win over Chicago State ... finished season with seven shot attempts, five of which were on goal.

2016: Appeared in first four matches of the season off the bench before missing remainder of season ... played season-high 25 minutes against New Mexico State Aug. 26 ... played total of 57 minutes.

Prep: A three-year letterwinner for the Indians ... helped lead Menomonee Falls to its conference title as a sophomore in the spring of 2014 ... played club for FC Milwaukee for four seasons, including a season of ECNL play ... has played for North Shore United the last three years, helping the club to back-to-back state titles and a third-place finish at the Disney Showcase.