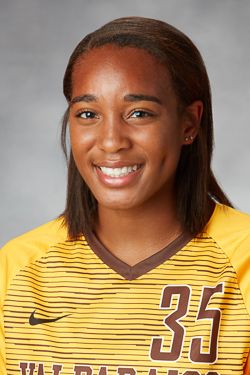 2017: An Honorable Mention All-MVC selection ... started all 19 matches in her first season with the Crusaders, playing a total of 1,370 minutes ... ranked second on the team with six goals, five assists and 17 points ... five assists is tied for fourth-most in a season in program history, while her 61 shot attempts are tied for sixth-most in a single campaign ... finished season second in the MVC in shots, tied for sixth in goals, seventh in points and tied for ninth in assists ... debuted with a bang for Valpo, scoring a goal and recording an assist in season-opening win Aug. 18 over Grace ... recorded 10 shot attempts in season opener, tied for third-most in a single match in program history ... followed up two days later by netting match-winner in victory over IUPUI ... became just the second player in program history to score goals in each of the first two matches of the season (Lori Moore, 2001) ... named MVC Offensive Player of the Week and Newcomer of the Week Aug. 22 for her efforts on the opening weekend of action ... scored goals in back-to-back victories Sept. 1 over Eastern Illinois and Sept. 3 against Belmont, the latter the match-winner in a 1-0 Crusader win ... earned MVC Offensive Player of the Week accolades for the second time Sept. 5 ... assisted on late match-winner in Valpo's MVC debut victory at Missouri State Sept. 23 ... tallied five points Sept. 28 in win over Chicago State, finding the back of the net twice and adding an assist as well in just 27 minutes of action ... recorded assists in back-to-back MVC matches Oct. 7 at Loyola and Oct. 15 versus UNI.

New Hampshire [2015-16]: Appeared in 32 games over her two seasons with the Wildcats, starting 22 times ... tallied a pair of goals as a sophomore against UMBC and Albany ... attempted 45 shots over the two years, 16 of which were on goal.