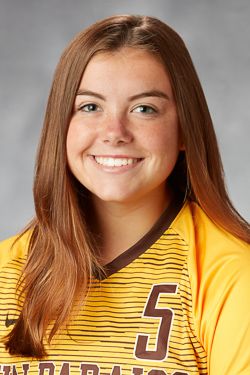 Spring 2021: Saw action in 13 matches for the Brown and Gold, starting seven times ... played a total of 829 minutes ... led off penalty shootout following draw with Evansville in MVC Tournament opener April 11 and knocked home her PK to help Valpo eventually advance ... finished season with 10 shot attempts, three of which were on goal.