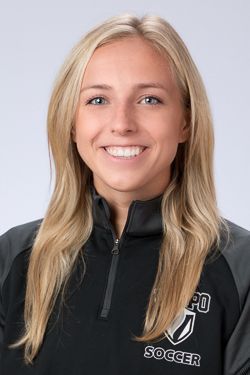 2019: Appeared in 16 matches in her first season in the Valpo uniform, starting nine times ... played a total of 655 minutes on the year, including going the distance in starts Aug. 23 against Green Bay and Aug. 30 at Bowling Green ... tallied 10 shot attempts on the year, three of which were on goal.

2018 (Montana): Saw action in six matches off the bench as a freshman, totaling 89 minutes ... played 45 minutes at Cal Baptist and attempted lone shot of the season.

Prep: A four-year letterwinner for the Rams ... part of Glenbard East's third-place team at 2016 Class 3A state tournament, which claimed regional title as well ... All-State seletion as a senior ... All-Sectional selection as a junior ... earned All-Conference honors as well ... two-year team captain ... played club for Eclipse Select SC, helping side to President's Cup championship in 2017 ... member of National Honor Society.