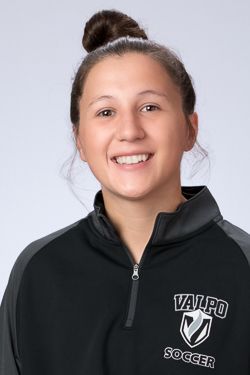 2019: Saw action in 13 matches for Valpo as a freshman, starting seven times ... played 730 minutes on the year ... tallied a team-high three assists on the year, all of which came within MVC play ... tied for second in the conference with her three assists in MVC matches ... assisted on match-winning goal in Oct. 20 win over Evansville ... registered assists on each of Valpo's first two goals in 3-0 win in regular season finale over UNI Nov. 1 to record Valpo's lone multi-assist match of the season ... finished year with 10 shot attempts, three of which were on goal.

Prep: Did not play high school soccer, instead choosing to focus her energy on playing club for Chicago Inter SC ... did play basketball for the Bobcats, earning All-Conference and All-Area recognition.