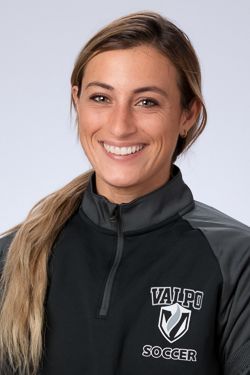 Nicole D'Agostino enters her second season on the Valpo women's soccer staff as the goalkeepers coach in the fall of 2021.

D'Agostino helped mentor freshman goalkeeper Nikki Coryell to one of the best seasons in program history by a netminder in her first season on staff in the spring of 2021. Coryell was named MVC Goalkeeper of the Year and a First Team All-MVC selection, posting a 5-4-5 record with seven shutouts and 59 saves while allowing just eight goals. Coryell set a Valpo freshman record with her seven clean sheets, while she moved into second in a single season in program history in both GAA and save percentage. She ranked among the top-25 nationally in all three categories as well.

D’Agostino was a four-year starter as a Division I goalkeeper, playing three seasons at Pittsburgh before graduating and transferring to Monmouth for her final season. At Pitt, D’Agostino closed her career sixth in program history in both goals against average and saves. She picked up seven victories as a sophomore, tied for fourth-most in a single season all-time at Pitt, and ranked third in the ACC in saves as a junior.

For Monmouth, D’Agostino backstopped a Hawks side which claimed the MAAC regular season championship. She started in 18 of her 19 appearances, led the MAAC with nine shutouts and ranked third in the conference in goals against average.

Following her collegiate career, D’Agostino had brief stints with professional sides Evian Thonon Gaillard and Washington Spirit. Prior to arriving at Valpo, D'Agostrino spent time on staff at Alverno College and serving as a coach at Camp Shutout, a camp devoted to training high-level youth goalkeepers. D’Agostino also assisted with soccer camps while playing at Pitt and at Monmouth as well.

D'Agostino graduated from the University of Pittsburgh in 2014 with a bachelor's degree in economics, and went on to earn her master's from Monmouth University in public policy in 2015.