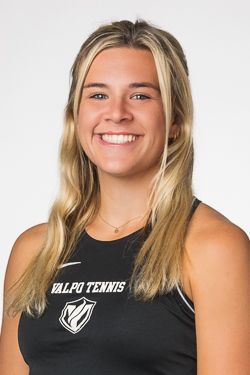 Claire Czerwonka (Kenosha, Wis. / Saint Joseph Catholic Academy) joined the Valpo women's tennis coaching staff as a graduate assistant coach prior to the 2022-23 season after spending the previous five seasons as a member of the team.

Czerwonka was tabbed the Missouri Valley Conference Scholar-Athlete of the Year this past season in addition to earning MVC All-Select Team status. She was part of the doubles tandem that won the Flight 1 Title at the MVC Individual Championships in Fall 2021 and earned the State Farm MVC Good Neighbor Award in 2020-21.

Czerwonka finished her career with a program-record 72 doubles victories and ranks fifth on the program’s singles wins list with 57. She totaled 20 doubles triumphs alongside her sister Olivia in 2021-22, as the duo tied with three other players for the single-season program record. Her leadership helped the Beacons reach new heights this past spring, as the program posted its highest win totals, both overall and in league play, since 2007. Valpo also earned its first conference tournament victory since 2006. The program’s success extended into the classroom, as women’s tennis won the Valparaiso University Team Academic Award, presented to the sport with the highest team grade point average.