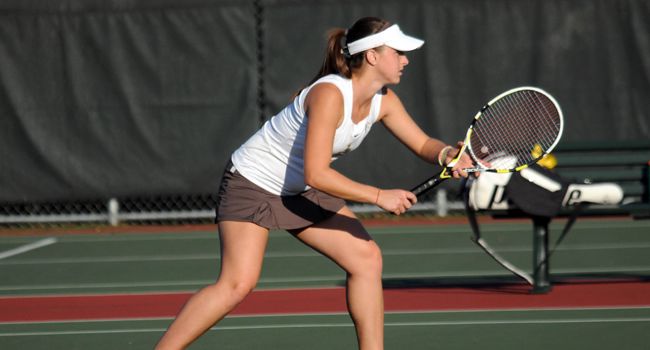 In the fall home opener, Valpo was able to defeat Robert Morris (Ill.) in convincing fashion; taking a 5-2 decision over the visiting Eagles.  The Crusaders swept the doubles competition and won four of six singles matches.

“Today was a great way to kick off the new school year,” said head coach Traci Young.  “I think everyone worked very hard and we deserved the win.”

Monday’s competition started with doubles play.  The pairing of Kristin Zakiewicz (Bristol, Ind./Northridge) and Paige Heuer (Munster, Ind./Munster) got things started for the Crusaders.  In the closest match of the day, Zakiewicz and Heuer were able to defeat Stephanie Messina and Rocio Fernandez 8-7 (7-2) in a tiebreaker.

In No. 1 singles, Zakiewicz found herself in a back and forth match with the Eagles’ Miranda.  Zakiewicz, however, was unable to find herself on the right side of a match, falling in a close 6-4, 6-3 decision.  In No.5 singles, Maria Bellorin of RMU was able to defeat Fredlake 6-0, 6-3.  Angelina Goheen would win her match by default.

The Crusader women are back on the court on October 21st, as the team travels to Detroit, Mich. to take on Wayne State.  Check ValpoAthletics.com for results following the competition.