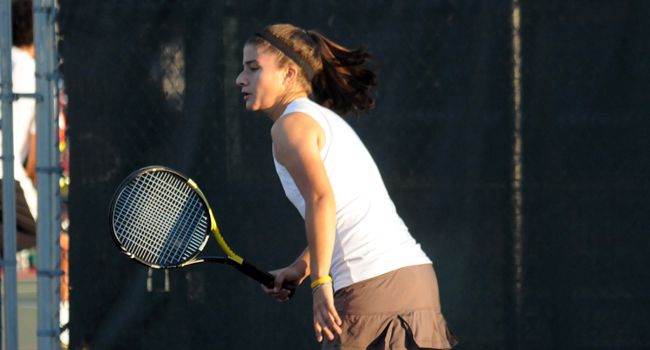 After their match at Ball State on Friday, the Crusader women’s tennis team returned home Saturday for an evening match-up against Western Michigan. Despite a solid effort from the Crusaders, the Broncos were able to defeat the Crusaders in a 7-0 decision.

In No.1 doubles, Kristin Zakiewicz (Bristol, Ind./Northridge) and partner Kaitlyn Hamel (Lakewood, Colo./Green Mountain) took one match in a 6-1 loss to Western Michigan’s Kathleen Hawkins and Nini Sujashvili. Megan Barthels (Grand Rapids, Mich./Catholic Central) and Paige Heuer (Munster, Ind./Munster) were able to take two matches in No.2 doubles, but would go onto lose in a 6-2 decision. Angelina Goheen Aurora, Ill./Rosary) and Michele Fredlake (South Bend, Ind./Saint Joseph’s) were unable to take a match from their Bronco opponents in No.3 doubles, as Western Michigan would sweep doubles play.

The Crusader women will continue their two-match home-stand on Friday, January 25th, as Valparaiso welcomes South Dakota to the Courts of NWI. The match is set to begin at 6:00 p.m. CT.