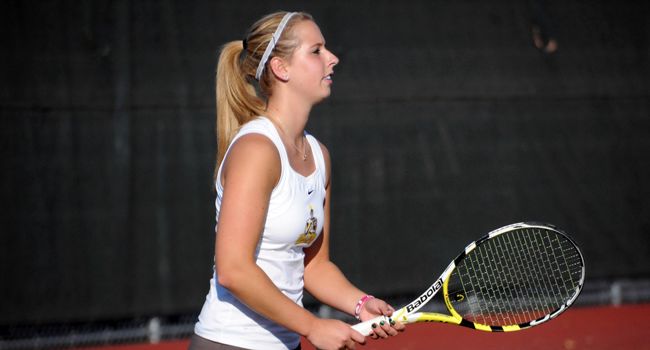 Playing the first match in their four game home-stand, the Crusader women dropped a hard fault 4-2 decision to Dayton on Sunday morning.

Valparaiso got off to a quick start in doubles play with Kristin Zakiewicz (Bristol, Ind./Northridge) and Kaitlyn Hamel (Lakewood, Colo./Green Mountain) defeating their Flyer opponents 6-2 in No.1 doubles. The 6-2 decision was the first win of the young season for the Crusader pairing. Megan Barthels (Grand Rapids, Mich./Catholic Central) and Paige Heuer (Munster, Ind./Munster) looked to claim their third straight victory at No.2 doubles, but the match would be suspended at 4-1 in favor of Dayton. The Crusaders would then clinch the doubles point after winning the No.3 doubles match by default.

Despite claiming the doubles point, the Crusaders were unable to match the play of the Flyers in singles play. Neither Hamel nor Zakiewicz was able to build off of their solid doubles play, as Hamel fell 6-3, 6-1 and Zakiewicz 6-0, 6-2 in No.1 and No.2 singles.

Play would be suspended at 6-4, 1-2 in No.5 singles with Michele Fredlake (South Bend, Ind./St. Joseph’s); the Crusaders would then win No.6 singles by default.

Up next for the Crusaders women is a home game against South Dakota State at the Courts of NWI on Sunday, February 16th. Doubles play is set to begin at 10:00 a.m.