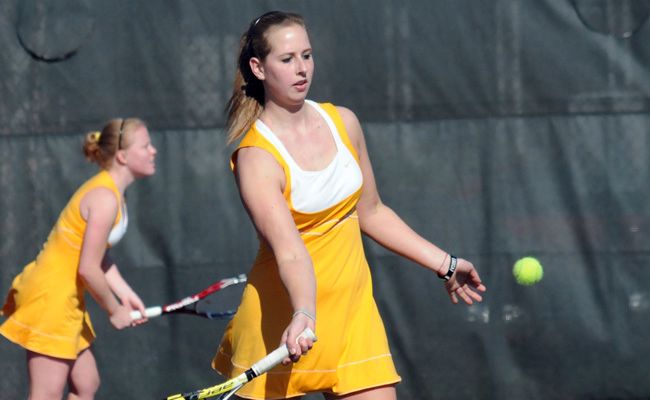 On Sunday morning, the Crusader women played South Dakota State in their second match of a four game home-stand. The Jackrabbits swept doubles play and won five of six singles matches to win the match.  Despite the loss, Valparaiso saw inspired play from Paige Heuer (Munster, Ind./Munster) in No.3 singles. Heuer claimed the lone Crusader victory of the day.

Kaitlyn Hamel (Lakewood, Colo./Green Mountain) and Kristin Zakiewicz (Bristol, Ind./Northridge) put forth a valiant effort in No.1 doubles, battling back in the match but coming up short in an 8-5 defeat.

Megan Barthels (Grand Rapids, Mich./Catholic Central) and Heuer continued their strong play in No.2 doubles, but would eventually drop the point 8-4 after coming back multiple times in the match.

In No.3 singles, Heuer won her second match of the season in a thrilling three set victory. Down one set to none, Heuer was able to win the second set and then come from behind in the super tie-breaker to win the match for the Crusaders.

The Crusaders would see more inspired play from Barthels in No.4 singles. Barthels was able to put together an amazing second set performance, but was unable to claim the match in a 6-0, 7-6 (7-5) defeat.

The Crusader women wrap up their four-match home-stand next weekend with a match on Friday, Feb. 21st against UTPA, and Saturday, Feb. 22nd against IPFW. Friday’s match is set for a 1:00 p.m. start-time; while Saturday’s match is set to begin at 1:30 p.m. Both matches will be played at the Courts of NWI.