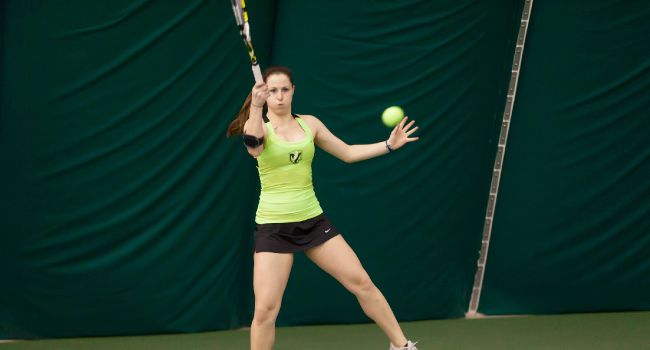 The Crusader women’s tennis team dropped their Horizon League match against Youngstown State on Friday, 7-0 at the Valpo Tennis Complex.

The Penguins earned a quick point in the doubles competition, taking victories at both No.1 and No.2 doubles. Kristin Zakiewicz (Bristol, Ind./Northridge) and Kaitlyn Hamel (Lakewood, Colo./Green Mountain) took four games in the No.1 doubles contest before falling 8-4 in the contest. Michele Fredlake (South Bend, Ind./Saint Joseph’s) and Angelina Goheen (Aurora, Ill./Rosary) were unable to take a game at No.2 doubles, as the Penguin’s Brendel and Sahni took an 8-0 victory. With Youngstown State winning two of the three doubles contests, the No.3 doubles contest, which was tied at 5-5, was retired.

Youngstown State did not let up in the singles competition, earning wins at No.1, No.2 and No.3 singles to secure the league victory. At No.1 singles, Hamel took three games in the first set, but was unable to claim a point for the Crusaders as the Penguins’ Sadovnikova took the match 6-3, 6-1. With the match in hand, the Penguins went onto sweep the singles competition, taking wins at No.4, No.5, No.6 singles to win the match 7-0.

The Crusaders return to action tomorrow to take on Cleveland State at Valpo Tennis Complex. Valparaiso’s regular season finale doubles as senior day for Zakiewicz and Aubree Zdanovec (Appleton, Wis./East). The match is slated for a 10:00 a.m. start.