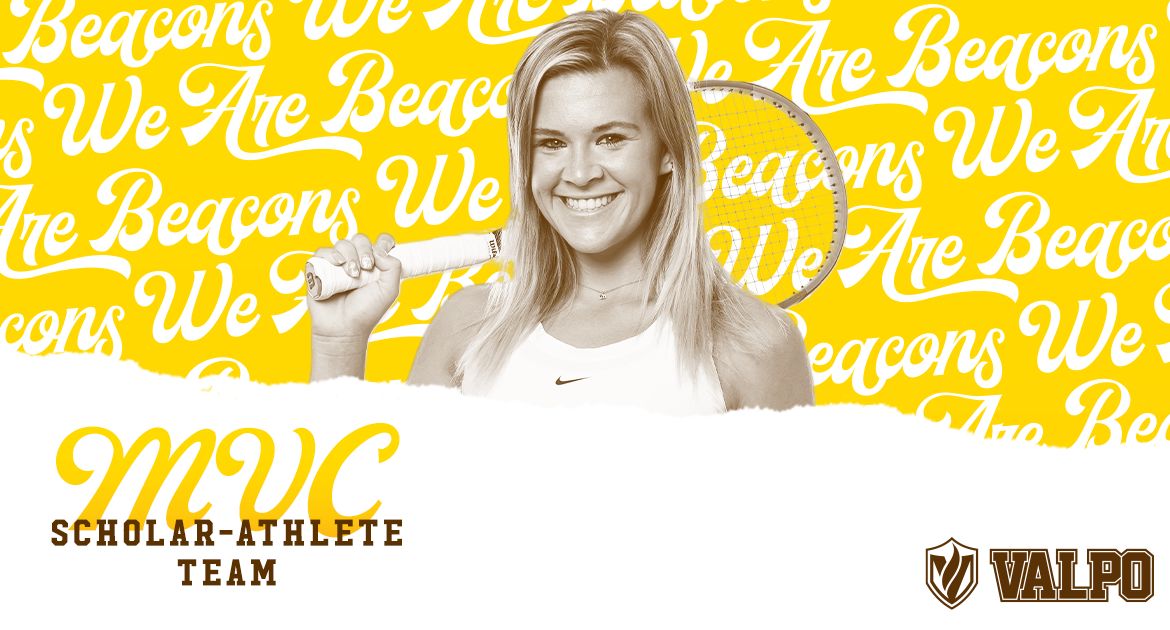 After five years of epitomizing the term student-athlete, Valparaiso University tennis fifth-year senior Claire Czerwonka (Kenosha, Wis. / Saint Joseph Catholic Academy) is being recognized in a major way for her excellence on the courts and in the classroom.

Claire, who owns a 4.00 grade point average in the FNP/DNP graduate nursing program after finishing with a 3.51 undergraduate GPA in nursing, earned MVC Scholar-Athlete Honorable Mention, the State Farm MVC Good Neighbor Award and the team “Valpo Award” in 2020-21.

Claire earned the dean’s list award for posting a 4.0 GPA in her Doctor of Nursing practice graduate program during the fall. She participated in “Books and Coffee,” reviewing “All In” by Billie Jean King and presenting the book in front of peers and the greater Valpo community. A Student-Athlete Advisory Committee member (2018-present), the three-year team captain is a member of Independent Study in Nursing at Valpo: Low Stress Nursing Care for Infants: Decreasing DNA Methylation; Fall 2020-Spring 2021. She graduated cum laude in May 2021 with her undergraduate degree in nursing. As a team leader, Claire has helped Valpo to its highest win totals, both overall and MVC play, since 2007 while helping the team win the Valparaiso University Team GPA Award. She also owns ITA Scholar-Athlete Awards, MVC Academic Honor Roll, MVC Commissioner’s Academic Excellence Award and Valparaiso University Presidential Academic Honors.

Olivia, who owns a 3.71 GPA in nursing, was named the MVC Player of the Year on Thursday night in addition to garnering First Team All-MVC status at No. 1 singles. This past fall, she won the Flight 2 Singles and Flight 1 Doubles crowns at the MVC Individual Championships. Olivia made a seamless transition to the No. 1 singles spot this spring. She finished 4-1 in Missouri Valley Conference play and accumulated 21 total singles wins this season, the third-most in single-season program history. She and Claire own 19 doubles wins this season, tied for the fourth most in single-season program history. As a team captain, Olivia participated in “Books and Coffee,” reviewing “All In” by Billie Jean King and presenting the book in front of peers and the greater Valpo community. She is involved in a Nursing Research Study that determines the effect of circadian lighting on premature infants’ DNA Methylation. She has volunteered at Munster Community Hospital to help run a class for future grandparents and parents to explain safe home care for a newborn baby. A Dean’s List honoree, Olivia is a member of Zeta Epsilon Chapter of Sigma Theta Tau International Honor Society of Nursing (Sigma) and has won ITA Scholar-Athlete Awards, MVC Academic Honor Roll, MVC Commissioner’s Academic Excellence Award and Valparaiso University Presidential Academic Honors.

Bertino owns a 3.82 GPA in elementary education, Jhaveri holds a 3.88 in digital media and Schoolcraft owns a 3.75 in biology. Bertino, who won an MVC Singles Player of the Week honor earlier this season, is part of St. Teresa’s of Avila community where she attends bible studies and sings at mass on the weekends. She is part of the Luce/community band at Valpo. Jhaveri won the team’s 2020-21 Scholar-Athlete Award last season and earned an MVC Doubles Team of the Week award in March 2021. Schoolcraft is one of two seniors on a team that has posted its highest win total since 2007 and won the team academic award for the highest GPA among Valpo teams.