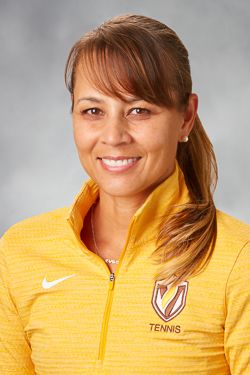 The 2017-2018 season featured a significant step forward for Valpo women’s tennis. Cecchini guided her team to its highest win total since 2006-2007, while the Crusaders won a combined 73 singles matches and 38 doubles matches. Several individuals thrived under Cecchini during Valpo’s first season in the prestigious Missouri Valley Conference. Jelena Vujanic was named to the MVC All-Select Team as a freshman, posting a 19-6 singles record in a season cut short by an injury. Her 19 wins ranked tied for fourth in program history, while fellow freshman Claire Czerwonka won 15 doubles matches, tied for ninth all-time.

Several players notched academic achievements under Cecchini’s guidance during the 2017-2018 campaign, as Jordan Kopfer was named to the MVC Scholar-Athlete First Team, while Dao Sysouvanh received MVC Scholar-Athlete Honorable Mention. In addition, the women’s tennis program was one of five Valpo athletic teams to receive the NCAA Public Recognition Award for outstanding academic performance. The Crusaders have garnered the honor each of the last four years.

Valpo saw a significant uptick in the program’s weekly conference awards in 2017-2018. The Crusaders won six MVC Weekly honors (three singles players, three doubles teams) after having two weekly awards in 2017, none in 2016, one in 2015 and before that none since 2008. The 2017-2018 season left Cecchini’s team with plenty to be excited about as the team featured just one senior, and the top two singles players were freshmen.

The 2018 spring season started favorably, as Cecchini led Valpo past IUPUI 7-0 on Jan. 20 for the program’s first 7-0 victory since 2013. It also marked the first time the program won its first dual match of the spring since 2007 and Valpo’s first victory over instate foe IUPUI since 2009, snapping a four-match head-to-head skid.

The Crusaders showed progress during the 2016-2017 campaign, their final season in the Horizon League. They played their best tennis of the year over the final five matches, beating Green Bay 4-3 before scoring at least two team points in each of the last four matches. Under Cecchini's direction, Paige Heuer finished with 41 career doubles wins, eighth in program history, and doubles partner Kathleen Hebble finished with 32 doubles triumphs, 10th in program history. Freshman Dao Sysouvanh showed improvement late in the year, winning her last four Horizon League matches of the season. Cecchini also oversaw the emergence of sophomore Randi Wind, who finished the season with 11 singles wins, the most of any Crusader in the last decade.

The Crusaders also excelled in the classroom under Cecchini in 2016-2017, posting a 3.71 team GPA, the best of any Valpo team in any sport. Kathleen Hebble earned a place on the academic all-league team in 2017 before graduating in three years with a degree in biology.

Cecchini spent the 2014-2015 season as an assistant coach at Valpo after serving the previous two seasons in the same capacity at Lehigh University in Bethlehem, Pa. The Mountain Hawks won 12 matches in her time there.

During her collegiate years, Cecchini was a standout at Penn State. As a Nittany Lion, she played No. 1 singles and was on the No. 1 doubles team for multiple seasons. She was named Freshman of the Year in the Atlantic 10 before serving as team captain in 1993 and 1994.

Cecchini is a native of Bloomington, Minn. She earned her bachelor's degree from Penn State in 1995 and obtained her MBA from Lehigh in 2002.

Cecchini and her husband, Dave, the head coach of the Valparaiso football team, have two sons, Evan and Will.