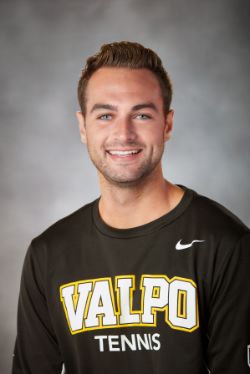 Danny Oakes was hired as an assistant coach for the Valparaiso University women’s tennis program prior to the 2016-2017 season.

Oakes  returns to Valpo after spending the last four seasons playing for the Crusader men’s team. He was a member of the 2016 Horizon League championship team, helping Valpo to its first NCAA appearance in program history and a program-record 22 team victories.

A native of Elburn, Ill. and a graduate of Saint Charles North High School, Oakes won 51 doubles matches during his four-year Valpo career. He also found success in singles play, including a career-high 10 wins as a junior in 2014-2015.

Oakes, who excelled in the classroom and was a member of the Horizon League academic honor roll, graduated from Valpo in 2016 with a degree in business management.