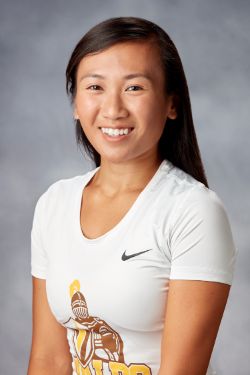 2019-20: Won 12 singles matches and 11 doubles matches during her senior season… Started the fall with four straight wins including three that contributed to her Flight 4 Singles title at the DePauw Invitational in October. She lost just two games while sweeping all six singles sets played in the tournament… Finished fourth in Flight 6 singles at the MVC Individual Championships after picking up a first-round victory over Drake in straight sets… Started the fall season with a spotless 3-0 mark by beating IUPUI, Butler and Milwaukee… Also earned a singles victory on Feb. 16 vs. Eastern Illinois to help the team best the Panthers… Notched a win at fifth singles on March 4 as the team topped Hampton on what proved to be the final day of the season… Started the fall with seven straight doubles wins while working with Demi Jhaveri for four matches and Amanda Tabanera for three… Totaled nine doubles wins during the fall… Teamed up with Tabanera for a win over IUPUI at No. 3 doubles on Jan. 18… Also grabbed a doubles win with Tabanera in the team’s Feb. 16 victory over Eastern Illinois.

2018-19: Picked up six singles victories including five in dual match play while going 7-10 in doubles (5-9 in dual matches)… Garnered back-to-back wins on April 14 and 17, topping UNI and Chicago State… Moved up to No. 1 doubles, where she was paired with Claire Czerwonka… Was victorious at the top doubles spot on three occasions with wins over Ohio Northern, UNI and Chicago State.

2017-18: Civil engineering major received MVC Scholar-Athlete Honorable Mention accolades… Owned 10 singles wins and 11 doubles victories during her sophomore campaign… Started the fall by winning three of her first four singles matches and her first three doubles matches… Teamed with Claire Czerwonka to win the fifth-place match in Flight 2 Doubles at the MVC Individual Championships on Oct. 9… She and Czerwonka were the MVC Doubles Team of the Week on Jan. 23 after prevailing at first doubles in a season-opening 7-0 win at IUPUI… Began the spring on a high note, winning three of her first four singles matches with all three victories coming against instate foes… Picked up a straight-set win over a former conference foe on March 30, winning at fourth singles against Northern Kentucky… Accounted for Valpo’s only victory on April 7 against MVC-leading Drake, teaming with Kopfer to prevail at third doubles … Gained her first MVC singles victory on April 8, coming from a set down for a three-set win over UNI… Joined forces with Czerwonka to notch a 6-4 doubles victory over Stony Brook in the MVC Tournament on April 27, helping Valpo win the doubles point in a 4-1 loss.

2016-17: Won five singles matches and two doubles showdowns during her first collegiate season... All five singles wins came in dual play... Notched her first career doubles win on Oct. 7, beating a Green Bay duo 6-2 alongside Randi Wind... Picked up her first career singles victory on March 10 at Cal Lutheran, beating Gianna Cupo 6-4, 6-2 at No. 5... Finished the year strong, going 4-1 in her last five matches with all four wins coming in league play... Started the stretch of success with her first career Horizon League win, a 6-1, 6-2 triumph over Green Bay's Theresa Tebon at No. 5 singles... Led the team in Horizon League singles victories with four.

Prep:  A three-star recruit who boasted the No. 4 ranking in the state of Wisconsin, according to tennisrecruiting.net...was tabbed as the 46th-best player in the Great Lakes region and held a No. 331 national ranking...went 36-2 in the fall of 2015 and was Division I runner-up at No. 1 singles in the Wisconsin Interscholastic Athletic Association (WIAA) state individual tournament...named Wisconsin State Journal/WisconsinPrepZone.com 2015 All-Area Girls Tennis Player of the Year.