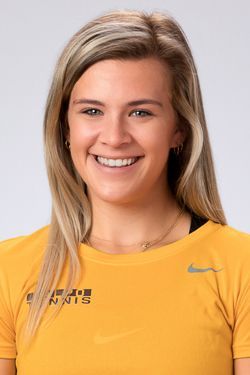 2020-21: Received the State Farm MVC Good Neighbor Award, which is presented to model student-athletes who are also outstanding citizens… Named MVC Scholar-Athlete Honorable Mention… Earned the team’s “Valpo Award,” which is bestowed upon the member of the program who best exemplifies work ethic, attitude, determination, passion, being a great teammate and being teachable and coachable… Recognized in the MVC Scholar-Athlete Spotlight… Finished the season third in program history in career doubles victories with 52… Rounded out the year with 44 career singles triumphs, a total that ranks ninth in the program record book… Won seven singles matches (six at No. 1 singles) and 12 doubles matches (all at No. 1 doubles) during the season despite the fall matches being cancelled due to COVID-19… Earned three MVC weekly awards (one singles, two doubles) to up her career total to nine (three singles, six doubles)… Posted a .667 doubles winning percentage (12-6), tied for the seventh best in program history and the best since 2004-2005…Went 4-1 in MVC doubles matches…  Earned a 5-7, 7-5, 1-0 (10-8) victory on Feb. 20 over DePaul’s Alina Kuzmenkova, a 2019 All-Big East Second Team honoree and two-time Big East all-academic team member who went on to earn All-Big East Second Team accolades again in 2021… Topped Wayne State’s Linda Liong 6-2, 6-3 on Feb. 28, earning a victory over a member of the 2019-20 First Team All-GLIAC squad who finished the 2019-20 season ranked 14th in singles in the Midwest Region and was an All-GLIAC Second Team choice in 2018-19. Liong went on to earn All-GLIAC First Team honors again in 2020-21 and was tied for 20th in the Midwest Region in the final ITA singles rankings… Put together a nine-match winning streak alongside her younger sister Olivia at No. 1 doubles that started on Feb. 27 and ended on April 17… Became the fifth player in program history and first since 2007 to reach 50 career doubles victories on April 3 at Drake. The milestone win, garnered alongside Olivia, came over quality competition as they topped Drake’s Liza Petushkova and Maria Tatarnikova 6-4. Petushkova was a two-time member of the All-MVC Select Team (2017-18, 2018-19) and was part of a doubles tandem that was ranked No. 71 nationally the previous season. She was also the 2017-18 MVC Freshman of the Year and went on to earn another MVC All-Select Team honor in 2020-21… Downed Missouri State’s No. 1 doubles tandem of Ellie Burger and Claire Martin 6-2 on April 10. Burger went on to earn 2020-21 All-MVC First Team honors… Beat Bradley’s Sandra Maletin and Victoria Sanchez Bronzetti 6-2 on April 18 at No. 1 doubles. Maletin was a two-time MVC All-Select team choice and 2019 All-MVC performer in doubles, and went on to earn MVC All-Select team for a third straight season in 2020-21… Accounted for the team’s lone point in a 4-1 MVC Tournament setback vs. Missouri State by besting Hana Sisirak 6-1, 6-0 at No. 1 singles. Sisirak was a 2020-21 MVC All-Select Team honoree… Earned MVC Commissioner’s Academic Excellence Award, MVC Academic Honor Roll and Valparaiso University Presidential Academic Honors.

2019-20: Went 12-11 in singles play and notched a 13-11 doubles mark… Finished the season ninth in program history (since 2000) in career doubles wins with 40… Through her junior season, owns a doubles winning percentage of .488 that ranks 12th in the Valpo record book… Started the fall with four straight singles wins, three of which contributed to the Flight 1 Singles title at the DePauw Invitational in September… Garnered fifth place in the top singles flight at the MVC Individual Championships on Oct. 5 thanks to a victory over UNI’s Harri Proudfoot… Opened the spring season with a straight-set victory over IUPUI’s Gabrielle Ochalik on Jan. 18, avenging a loss to Ochalik from the previous season… Defeated Milwaukee’s Mayya Perova, the Horizon League Freshman of the Year and a member of the All-Horizon League First Team the previous season, in straight sets on Feb. 8 at the top singles spot… Won in straight sets against Hampton’s top singles player on March 4… Won eight doubles matches alongside Isabella Schoolcraft during the fall season… Teamed up with Schoolcraft for a victory at No. 1 doubles against Butler on Jan. 19… United with her younger sister Olivia at No. 1 doubles starting on Feb. 8… Picked up her first win with Olivia on Feb. 16 vs. Eastern Illinois and later closed out the season with back-to-back doubles wins on March 4 against Hampton and Grand Valley State… The sisters were named MVC Doubles Team of the Week on March 10.

2018-19: Placed third in doubles and fifth in singles at the MVC Individual Championships in the fall … Qualified for the ITA Midwest Regional… Played No. 1 singles and No. 1 doubles throughout the spring… Ranked third on the team in singles victories with 11 while leading the team with 12 doubles wins… Finished the season on a high note with back-to-back singles wins over Chicago State and Missouri State before seeing her match go unfinished in the MVC Tournament against Illinois State.

2017-18: Played No. 1 singles as a freshman, totaling 14 singles wins and a team-high 15 doubles wins… Single-season doubles win total of 15 tied for ninth in program history… Career doubles winning percentage of .500 through one season ranks tied for ninth in program history…  Was named the individual singles champion of the Flames Invitational hosted by UIC Sept. 22-23. She enjoyed a perfect weekend in singles play including a victory over a UIC junior who was a member of the all-Horizon League second team a year prior… Teamed with Dao Sysouvanh to win the fifth-place match in Flight 2 Doubles at the MVC Individual Championships on Oct. 9… Was named the MVC Singles Player of the Week on Jan. 23 and teamed with Sysouvanh to take home Doubles Team of the Week honors. That came after Czerwonka won in straight sets at No. 1 singles to help Valpo to a 7-0 victory over IUPUI in her spring season debut… Played a key role in a 7-0 victory over IUPUI to open the season, Valpo’s first 7-0 win since 2013, its first season-opening win since 2007 and its first victory over the Jaguars since 2009… Won her second MVC Doubles Team of the Week award on Feb. 20, this time alongside Jelena Vujanic after defeating No. 1 doubles teams from Northern Illinois and Lewis… Picked up her second MVC Singles Player of the Week award on March 27 after defeating Omaha’s Michelle Lo, a three-time all-Summit League performer, and the No. 1 singles player from Grand Valley State, a team that was 20-3 and ranked 18th nationally in Division II… Enjoyed her third Doubles Team of the Week distinction on April 3 after she and Vujanic registered a 6-1 win over Northern Kentucky… Won five matches in a row from Feb. 10 to March 25, going nearly two months between losses… Picked up an MVC win over UNI on April 8 in straight sets… Gained conference doubles wins alongside Vujanic over UNI and Missouri State before teaming up with Sysouvanh to record a 6-4 doubles victory over Stony Brook in the MVC Tournament on April 27, helping Valpo win the doubles point in a 4-1 loss.

Prep: Entered Valpo as a four-star recruit, according to tennisrecruiting.net... Ranked third in Wisconsin, 14th in the Great Lakes and No. 133 in the nation... Was a three-time state champion from 2014-16, compiling an 89-2 record during those seasons... Went 30-0 as a senior and didn’t drop a set all year to finish her four-year high school career with a 115-8 mark... Member of National Honor Society... Selected by the Wisconsin Tennis Association Awards Committee as the recipient of the 2017 Frank Parker Junior Award, presented to an outstanding athlete who best displayed good sportsmanship on and off the court and served the best interests of tennis.

Personal: Daughter of Tracie and CJ Czerwonka... Has one sister, Olivia... Majoring in nursing... Born on March 6... Went on a mission trip to Nicaragua prior to her freshman year at Valpo