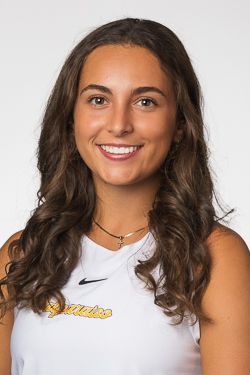 2021-22: Posted a 15-11 singles record including a 4-1 mark in MVC play, competing mostly at No. 5 singles... Made her season doubles debut during an MVC Tournament match on April 22 vs. Stony Brook and teamed up with Demi Jhaveri for a 6-2 victory, her first collegiate doubles win... Had regular-season conference singles wins over Drake, UNI, Missouri State and Bradley... Named the MVC Singles Player of the Year on March 15... Received MVC Scholar-Athlete Honorable Mention... Earned Valparaiso University Presidential Academic Honors.

2020-21: Garnered six singles wins including one at No. 3 singles and five at No. 4 singles… Topped a Ball State opponent in straight sets in her first collegiate singles match on Jan. 31… Won four consecutive matches from Feb. 28 to March 13… Picked up a 6-1, 6-1 win in the April 2 conference opener at UNI… Member of MVC Academic Honor Roll.