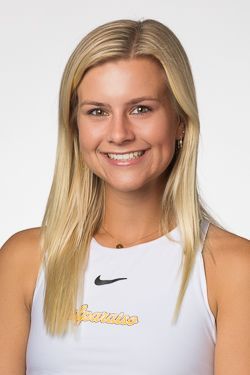 2021-22: Won MVC Individual Championships at Flight 1 Doubles and Flight 2 Singles at the MVC Individual Championships hosted by Valpo during the fall... Named the Missouri Valley Conference Player of the Year following the spring season... Became the first Valpo student-athlete in any sport to earn MVC Player of the Year since the University joined the conference in 2017... Also become the first Valpo women’s tennis player to be named conference Player of the Year since 2002... Named MVC Scholar-Athlete First Team and First Team All-MVC at No. 1 Singles... Upset the defending MVC Player of the Year and reigning MVC Flight 1 Singles Champion in straight sets during a match against Illinois State, handing the Illinois State player the first league loss of her career... Finished the season with 22 singles wins, the third most in single-season program history... Posted a 4-1 MVC record in singles play despite moving up to No. 1 singles for the spring season... Collected 20 doubles wins during the season alongside her sister Claire, tying with three others for the program record... Finished her junior season ranked in the top 10 in program history in both career singles victories (46, ninth) and career doubles victories (45, ninth) while also ranking in sixth in career singles winning percentage (.613) and second in career doubles winning percentage (.616).

2020-21: Earned MVC All-Select Team and MVC Scholar-Athlete First Team accolades in addition to being named the team’s Most Valuable Player… Hauled in four MVC weekly awards (two singles, two doubles) to lift her career total to five (two singles, three doubles) through two seasons… Finished the season with a career doubles winning percentage of .595 that ranks second in program history and a career singles winning percentage of .585 that is tied for sixth… Posted a 12-6 record at No. 1 doubles alongside her sister Claire, a .667 single-season doubles winning percentage that ranks tied for seventh in program history and the best since 2004-2005… Led the team in singles victories with 11, all coming at the No. 2 position… Posted an 11-8 singles record… Finished conference play with a 4-1 singles record and 4-1 doubles mark… Dropped just two games en route to a 6-0, 6-2 victory over Milwaukee’s Mayya Perova at second singles on Feb. 19. Perova was the 2018-19 Horizon League Freshman of the Year and a member of the All-Horizon League squad as a rookie… Put together a nine-match winning streak alongside her older sister Claire at No. 1 doubles that started on Feb. 27 and ended on April 17… Enjoyed a six-match singles winning streak that began on Feb. 28 and ended on April 3… Won alongside Claire at the top doubles spot on April 3 at Drake. The win came against competition as they topped Drake’s Liza Petushkova and Maria Tatarnikova 6-4. Petushkova was a two-time member of the All-MVC Selection Team (2017-18, 2018-19) and was part of a doubles tandem that was ranked No. 71 nationally the previous season. She was also the 2017-18 MVC Freshman of the Year and went on to earn another MVC All-Select Team honor in 2020-21… Downed Missouri State’s No. 1 doubles tandem of Ellie Burger and Claire Martin 6-2 on April 10. Burger went on to earn All-MVC First Team honors… Rallied from a set down to beat Burger in singles on April 10 vs. Missouri State. Burger is a former MVC individual singles champion and earned MVC All-Select Team honors twice before this year’s first-team all-conference selection… Beat Bradley’s Sandra Maletin and Victoria Sanchez Bronzetti 6-2 on April 18 at No. 1 doubles. Maletin was a two-time MVC All-Select team choice and 2019 All-MVC performer in doubles, and went on to earn MVC All-Select team for a third straight season in 2020-21… Topped Bradley’s Bonzana Lojpur in straight sets on April 18. Lojpur was the 2019 Flight 2 MVC Singles champion, a 2019 All-MVC performer, the 2019 MVC Freshman of the Year and went on to earn 2021 MVC All-Select Team status… Finished her sophomore season with 24 career singles wins and 25 career doubles triumphs… Earned MVC Commissioner’s Academic Excellence Award, MVC Academic Honor Roll and Valparaiso University Presidential Academic Honors.