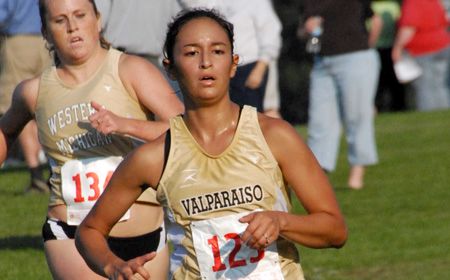 Alyssa Bradford (Mukwonago, Wis./Mukwonago) and Windy Santa Cruz (Fall Creek, Wis./Fall Creek) have both been named to the Women’s Indoor Track and Field Academic All-Horizon League squad for their performances both on the track and in the classroom during the 2010 indoor campaign.

Bradford, a senior, carries a 4.000 GPA as an exercise science major.  She was the Crusaders’ top middle distance runner during the 2010 indoor campaign, earning a trio of third-place finishes over the course of the season in the 800m run.  Bradford  placed tenth in the preliminaries of the 800m run at the Horizon League Championships, running a season-best time of 2:20.10.  An ESPN the Magazine Academic All-District V first team selection last year, Bradford repeats on the Indoor Track and Field Academic All-League team and has also earned Academic Honor Roll recognition from the league each semester Valpo has been in the league.

Santa Cruz is also a senior, and she carries a 3.919 GPA as a chemistry major.  She was Valpo’s second-fastest runner during the indoor season in both the 800m and the one mile runs, and posted a pair of top-ten finishes in the 800m run.  This is Santa Cruz’s second straight year earning Academic All-League honors during the indoor season, and she also has been on the Academic Honor Roll each semester Valpo has been a Horizon League member.