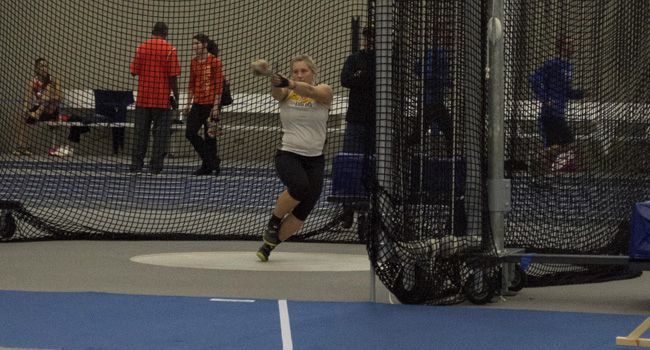 Valparaiso senior Sarah Drozdowski (Roselle, Ill./Lake Park) has been named the Horizon League Indoor Field Athlete of the Week for her record-breaking performances this past weekend at both the Meyo and Windy City Invitationals.

On Friday at the Meyo Invitational, Drozdowski shattered Valparaiso’s all-time record in the weight throw by over three feet. The previous school record, owned by Drozdowski, stood at 57’4 ¾”. The senior thrower set the new standard at 60’8”. The record-breaking throw was good for fifth overall in the event.

The program’s new standard of 60’8” would not last long however, as Drozdowski was able to break her own record for the second time on Saturday at the Windy City Invitational. This time, Drozdowski would throw for 61’4 ¾” and take second in the event. Drozdowski’s effort was not only the best in program history, but also the current best in the league by over five feet.

The senior thrower then topped off her weekend with a third place finish in the shot put with a 38’9 ¾” throw.

This marks the second time that Drozdowski has earned the league’s Indoor Field Athlete of the Week honor. The senior first received the honor for her performance during the week of Jan.7-13.

Drozdowski and the Crusaders return to the track this Saturday to compete at the Purdue Invitational in West Lafayette, Ind.