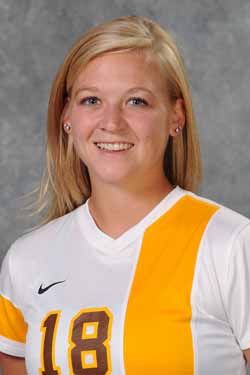 2014: Appeared in ten matches off the bench during senior season, making a start on Senior Night Oct. 4 against Loyola ... after appearing just once in a seven-week stretch, came off the bench Oct. 25 against Detroit and recorded an assist on a 35-yard flip throw less than a minute later, helping the Crusaders to the 1-0 win to clinch the HL regular season title ... scored her first career goal in the very next game, scoring directly from a corner kick in the regular season finale Oct. 31 at Green Bay ... came off the bench up front in both of the Crusaders' wins in the Horizon League Championship ... registered four shot attempts on the season.

2013: Missed entire season due to injury.

2012: Appeared in 13 matches in a reserve role for the Crusaders...recorded an assist in her first game of the season versus Bowling Green (Sept. 9)...logged a season-high 70 minutes against Youngstown State on Oct. 20th...registered seven shot attempts on the season, five of which were on goal ... Chi Epsilon Pi member (Meteorology Honor Society) ... Treasurer of Alpha Lambda Delta.

2011: Saw action in 13 matches as a freshman, making one start ... made collegiate debut on Aug. 19 against Morehead State ... made first career start against Coastal Carolina (Sept. 2) at the Liberty Invitational ... tallied first collegiate assist against IPFW on Aug. 21 ... also registered a helper against Butler in the Horizon League Tournament (Nov. 1) ... tallied four shot attempts on the season, including one on goal against IPFW ... played a season-high 93 minutes against Butler in the conference tournament match.

Personal:  Abby is the daughter of Paul and Sue Kenyon ... majors are meteorology and mathematics ... born Sept. 6, 1992.