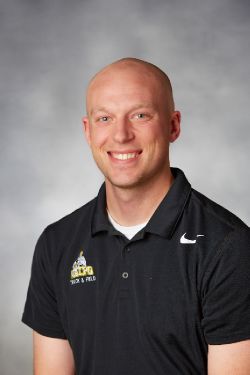 Patrick Heckroth enters his second year with the Crusader Track & Field Program. He continues to work with the sprints and hurdles; and is recruiting coordinator for the Crusader program.

In his first year he coached Nicole Zehel to the 3000 meter Steeplechase conference championship. Heckroth had tremendous success right away for the Crusaders, as his athletes posted three school records and 14 top-five all-time marks. Overall, the sprints and hurdles group posted over 120 personal bests throughout the indoor and outdoor season.

Heckroth joined the Crusaders after having spent time in California and Iowa. Most recently, Heckroth was a Volunteer Assistant at Fresno State University in Fresno, Calif. With the Bulldogs, Heckroth helped to develop three USA Junior National Qualifiers in the 400 hurdles, two Mountain West Conference champions, and numerous Mountain West All-Conference selections. In addition to coaching experience at the collegiate level, Heckroth spent time as the sprints and hurdles coach at Waverly-Shell Rock High School. Under his instruction, the team shattered state records and won multiple State and Drake Relay championships.

Prior to coaching, Heckroth was a student-athlete at the University of Northern Iowa. As a member of the Panther’s track & field team, he specialized in the 400-meter hurdles.

Heckroth holds a USATF Level 3 and IAAF Level 5 Elite in Sprints and Hurdles, a bachelor’s degree in Movement and Exercise Science from the University of Northern Iowa and a master’s degree in Sport Psychology from Fresno State University.