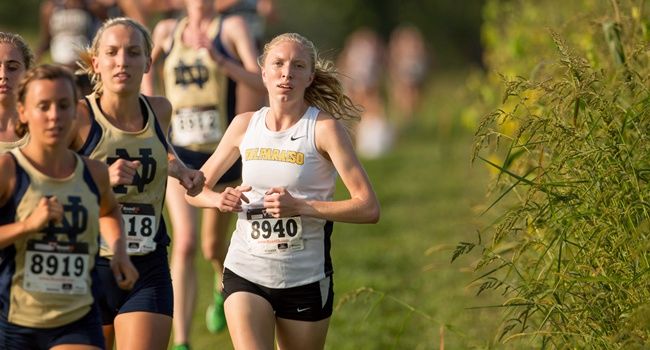 While junior Jessica Richardson (Columbus, Ind./North) turned in another outstanding time at the 25th Annual Crusader Open Saturday, freshman Liz Bloy (Freedom, Wis./Freedom) garnered ample attention as she finished with a time a little less than 20 seconds after Richardson.

Conditions were perfect for Friday's run with 33 women and 27 men competing in the silver anniversary of the Crusader Open. The Notre Dame Fighting Irish came away with the team win in the women's race while the IUPUI Jaguars edged out the Fighting Irish on the men's side.

Richardson recorded the best time for the Crusaders in the 5K race, as she crossed the line at 18:39.7. Bloy stopped the clock at 18:58.2 in her first collegiate meet. However, it wasn't enough as Notre Dame finished first through sixth as they captured the title at this year's open.

On the men's side, the IUPUI Jaguars narrowly defeated the Fighting Irish as they finished just one team score ahead of Notre Dame despite an average time behind its intrastate foes.

Valpo hits the trail again Saturday, September 21st in the Iona Meet of Champions. The race from the New York borough of the Bronx begins at 9:15 am Central Time.