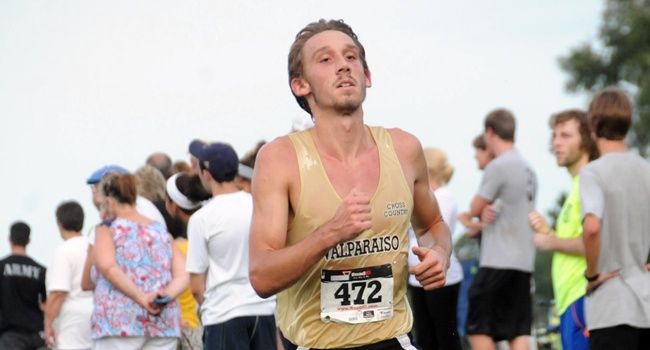 Divided into two races - the Gold and the Blue - the Notre Dame Invitational welcomed 1,210 runners overall. The Crusaders competed in the Gold heat with 22 other schools on the women's side and 25 others in the men's half.

Junior David Rutkowski (Cedarburg, Wis./Living Word Lutheran) was the first Crusader to complete the five-mile course, doing so in 27:34. The time was good for 107th overall out of 160 places. Freshman Dan Walters (Crown Point, Ind./Crown Point) crossed the line just a half of a minute behind Rutkowski as he clocked in at 28:05, which earned him 126th place overall. Fellow freshman Jesse Greenhagen (Waverly, Minn./Mayer Lutheran) ended the race at 29:14.

As a team, Valpo earned a 22nd-place finish out of 23 competing schools.

Last week's Horizon League Runner of the Week Jessica Richardson (Columbus, Ind./North) turned in another stellar time as she completed the 5K course in 18:25.4. That finish was the 28th-fastest out of 212 runners. Sophomore Dezzarae Arce (Orland Park, Ill./Victor J. Andrew) made her mark turning in a 20:05.6 time (150th place). Hannah Schilling (Fraser, Mich./Lutheran North) crossed the line just six places behind Arce with a 20:18 finish. Senior Claire Johnson (Eden Prairie, Minn./Eden Prairie) was on Schilling's heels as she stopped the clock at 20:25.9.

The Bradley Classic is next up for the Crusaders. They'll head to Peoria on Friday, October 18th for the 3:00 pm race.