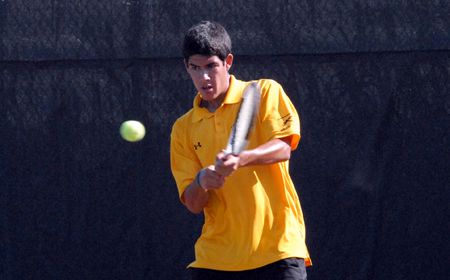 DeHerrera and Litscher won two of their three doubles contests in Flight 1.  They opened with an 8-4 victory over Matyas Hilgert and Vance Davis of Eastern Illinois.  After an 8-5 loss to Bradley in their second match, the duo rallied from a 5-2 deficit in a tie-break to post a 9-8 (8-6) victory over Mat Nelson and Josh Oothoudt of Green Bay.

“One doubles was definitely our bright spot today,” head coach Jim Daugherty said after play commenced for the day.  “They came through to win a couple of tough matches and really played well when it counted.”

“Carlton and Sid are improving,” Daugherty said.  “Their last win was a great way to finish the night.  It should give them some confidence as they go forward.”

Kyle Stump (Plymouth, Ind./Plymouth H.S.) and Adam Whitmer (Shipshewana, Ind./Westview H.S.) fell in all three of their matches on Friday.  They fell 8-3 to both Saint Louis and Western Illinois while dropping a 8-2 decision to Eastern Illinois.

The Crusaders will return to the courts on Saturday morning beginning at 9 a.m. with a final doubles match before beginning singles action.