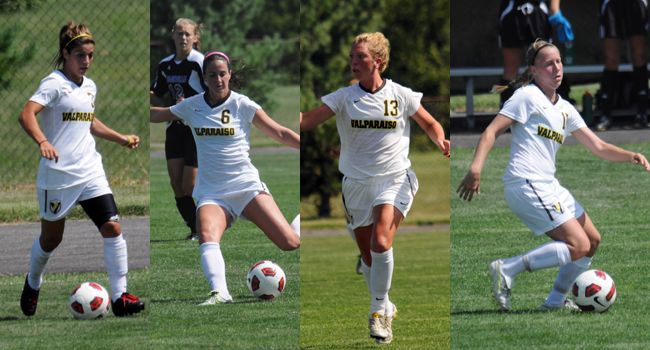 Luisa Desario, Rachel Hoaglin, Casey Pedersen, and Kelsey Draper were all honored by the league.

Valparaiso’s women’s soccer team was represented by four players when the Horizon League’s First and Second Teams as well as All-Newcomer Teams were released by the conference office on Monday afternoon (Oct. 31).

Desario finished second on the team with 10 points this season, scoring four goals and adding two assists.  The Crusader midfielder and forward tallied the match-winning goal at Loyola (Chicago) and led the Brown and Gold with 47 shot attempts on the season, seventh most in the Horizon League.  The junior earns All-League honors for the second time during her career after being named to the All-Horizon League First Team as a freshman.

Hoaglin leads Valpo in scoring and is tied for fourth in the conference with four goals this year.  The junior has also added three assists for 15 total points, a mark that ranks seventh in the league.  The midfielder tallied three match-winning goals on the season, including one against Green Bay in league play.  Hoaglin earns her second All-League honor as well after being named to the All-Horizon League Second Team as a freshman.

Pedersen earn All-Horizon League honors for the first time in her career after tallying nine total points for the Brown and Gold.  The midfielder and forward scored three times and added three more assists, finishing the year with 25 total shot attempts.  The fifth-year senior converted a penalty kick against Wright State to help the Crusaders finish in a draw.

Draper helped solidify the Crusader midfield during her freshman season, starting all 18 matches for the Crusaders.  She scored her first collegiate goal this season at Bowling Green and added her lone assist on the match-winner against Butler.

Valparaiso (8-6-4, 4-2-2 Horizon) will take on Butler on Tuesday afternoon at Eastgate Field in the quarterfinals of the Horizon League Tournament.  Kickoff is slated for 1 p.m.