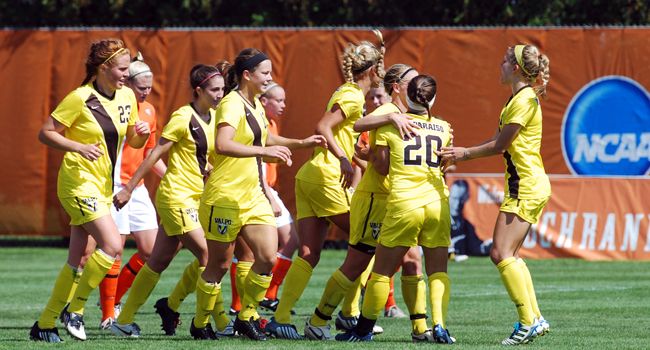 Valpo has added eight members to its women's soccer program for the fall. (John Enright)

“Today is an extremely exciting day for our soccer program,” Marovich said.  “We are adding eight very special and talented young women to our Valparaiso University Soccer family.  We know they will be successful here because all eight possess the qualities that define our program as Champions in Competition, Classroom and Community.  This is evident in their commitment to continuous improvement, a fiercely competitive attitude, high character and a standard of excellence for academics.”

“Taylor was a player we identified late the process and we were impressed with her composer in the defensive third of the field,” added Marovich.  “She will bring a physical presence along with a west coast playing style which will be a great asset to our program.”

Craven is a 5-9 midfielder from Frankfort, Ill.  She was an All-State selection as a junior playing for Lincoln-Way North High School.  The last two seasons she has led the Phoenix to Southwest Suburban Red Conference titles as well as regional championships.  An All-Tournament Team selection for the Pepsi Showdown as a junior, she also plays for the Darien Soccer Club.

“Rita has been a dynamic player at every level she has competed at,” Marovich said.  “She has the ability to not only score goals but create opportunities for her teammates with her vision on and off the ball.  Rita is a technical player that can break down defenders off the dribble but will give us flexibility to compete in both the attacking and midfield thirds.”

DeNard is a 5-6 defender from London, Ont.  She has helped lead Catholic Central High School to a pair of Western Ontario Secondary Schools Athletics Association championships as well as two city titles.  DeNard has also helped lead her club team North London Galaxy to the Ontario Cup finals as well as the Canadian National Championships.

“Sabrina impressed us each time we watched her play as she plays with unwavering passion and determination,” stated Marovich.  “She is disciplined in her defensive shape and does an outstanding job at keeping possession.  Her pace and willingness to get forward will be a tremendous asset to the way we want to play.”

Fassbinder is a 5-7 midfielder from Hudson, Wis.  Playing for the St. Croix Scorpions club team in Minnesota, Fassbinder has led her squad to four Minnesota State Cup finals.   They also won the 2011 Region II championship and were finalists at the Club National Cup.  She attends Hudson High School.

“Jennifer is a possession midfielder that does a wonderful job of moving the ball for her team,” said Marovich.  “We were impressed with the impact she makes in a very simple way with her game awareness.  Jenny switches the point of attack and has the creativity to get out of difficult situations with her technical ability.”

Ludwig is a 5-10 forward from Downers Grove, Ill.  A two-time All-Western Suburban Conference selection for Downers Grove South High School, she also earned All-Sectional honors as a sophomore.  She has led the Mustangs to three conference titles and also plays club for the Darien Dynamos.

“Sarrah has an energy and intensity level that we really liked,” added Marovich.  “She does an outstanding job in the box on all set pieces and we are looking for her to be presence in the air.  Sarrah's ability to put defenders under pressure is going to be a wonderful addition to our attacking third of the field.”

Oelschlager is a 5-6 defender from Glendale, Ariz.  Playing for Mountain Ridge High School, she earned Honorable Mention All-Region honors as a freshman.  She was named a Top Drawer Soccer Top-10 Player to Watch in the Rocky Mountain/Southwest Region and she also plays for Sereno Soccer Club, which is an eight time state champion and participates in the Elite Club National League.  She also was a regional finalist with her club team in 2008.

“Shelby is a very athletic defender who can defend just about anyone on the field,” commented Marovich.  “She has great awareness and is a wonderful competitor.  Her experience has been a big part of her development as she has received outstanding coaching.  Shelby has consistently played against some of the top forward in the states which has prepared her for this jump to the collegiate game.”

Ryfiak is a 5-7 forward from Rockford, Mich.  As a junior for Rockford High School, she was an All-OK Conference Red selection and has twice earned All-District accolades for the Rams.  She plays club soccer for the Michigan Hawks and has been a member of the Michigan State Olympic Development Program.

“Jordyn's consistent performances in winning the end line and scoring goals makes her a fantastic addition to our team,” Marovich stated.  “She has continued to grow as a player and seems to have added something new to her game each time we saw her perform.  We are excited to have Jordyn use her vision and attacking mentality to create scoring opportunities for herself and her teammates this fall.”

Silvasi is a 5-8 goalkeeper from Dexter, Mich.  Playing club soccer for the Michigan Hawks in the Elite Club National League for the last 10 years, she was named a Top Drawer Soccer Top-20 Player to Watch in the Midwest Region.  She has been a three-time Michigan State Cup Most Valuable goalkeeper and a six-time State Cup champion.  She led her team to the 2008 regional finals and has also been a member of the Olympic Development Program.  She helped lead her Michigan ODP team to the 2009 national championships.  She attends Dexter High School.

“Sarah is a strong and composed goalkeeper who competed for an ODP National Championship with the Michigan '94 ODP team,” said Marovich.  “These experiences and her willingness to compete and continuously improve make her an outstanding addition to our program.”

“We have something special going on here in our soccer program and these young women are another recruiting class that elevates our talent level,” Marovich concluded.  “Our current players are looking forward to having them join in our quest to accomplish the goals and high standards of expectation we have set for the program.  I would like to thank my staff for the excellent job in identifying not only very talented soccer players but individuals that will be wonderful representatives or Valparaiso University and the Horizon League.”