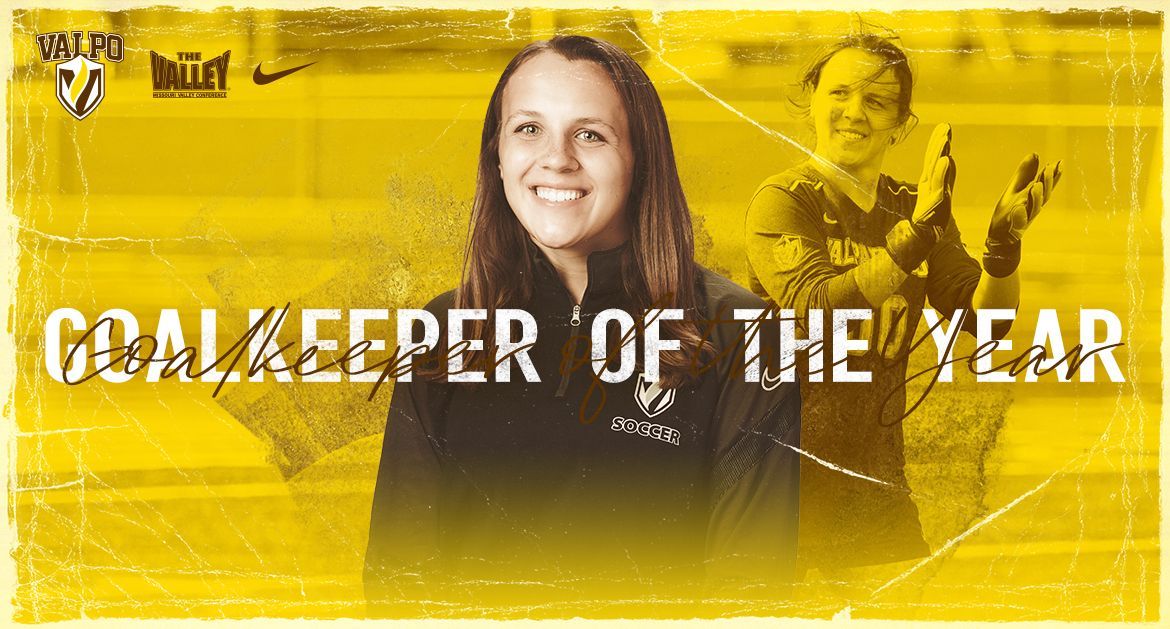 The Valpo soccer team was well represented as the Missouri Valley Conference announced its postseason awards on Friday morning, highlighted by the selection of freshman goalkeeper Nikki Coryell (Aurora, Ill./Metea Valley) as the conference’s Goalkeeper of the Year.

Coryell has been stellar all season long backstopping the Valpo defense between the goalposts, as she closed the regular season with a 0.59 GAA and an .868 save percentage, posting five shutouts in 11 regular season matches. A two-time MVC Defensive Player of the Week selection, Coryell surrendered just four goals in eight MVC fixtures and allowed one goal or fewer in all eight regular season conference contests.

Coryell has been just as strong as ever since the start of the MVC Championship, posting a pair of clean sheets to lower her season GAA to 0.49 and her save percentage to .885. She already owns Valpo’s freshman record with seven shutouts —a mark which currently ranks ninth nationally — and is within range of the program’s overall single-season records for both GAA and save percentage as well.

Maris earned First Team All-Conference recognition for her role in Valpo’s robust defensive effort this season. After not playing a competitive match in over two and a half years due to injury, Maris has returned this year and has played every minute of every match at left back for the Brown and Gold. During the regular season, that amounted to 1,070 minutes over 11 matches, in which the Valpo defense surrendered just seven goals and recorded five shutouts. Maris has then played all 219 minutes at right back in Valpo’s pair of clean sheets in the MVC Championship. Maris also contributed on the offensive end with an assist on Valpo’s opening goal in its win over Missouri State late in the regular season schedule, a victory which secured a key three points.

Dugan received First Team All-MVC honors for her work up front for the Brown and Gold this spring. Dugan has been a stalwart on the attack for Valpo this year, playing 1,096 of 1,289 possible minutes through the MVC semifinals — by far the most of any Valpo attacker. She played 80 or more minutes seven times over 11 regular season matches. Dugan notched a key goal for the Brown and Gold in the 67th minute against Drake to equalize the match against the Bulldogs less than four minutes after Drake had taken the lead in an eventual draw.

James picked up spots on the Honorable Mention All-MVC and All-Freshman squads after closing the regular season with a team-high eight points. The rookie, who was a three-time MVC Freshman of the Week selection this season, notched goals in non-conference play against Chicago State and DePaul, and then was involved with all three of Valpo’s match-winning goals in MVC action. James scored the match-winner in Valpo’s key victory in the penultimate match of the regular season against Missouri State, while assisting on the game-winners against Indiana State and Illinois State — the latter clinching the three seed in the MVC Championship for Valpo.

It was a historic haul of postseason awards for the soccer program. Coryell became the first goalie in program history to earn a league’s Goalkeeper of the Year accolade and is the first freshman to earn MVC Goalkeeper of the Year honors since 2012. Meanwhile, Valpo’s three honorees on the First Team not only tied for the conference high, it surpassed the program’s total number of two First Team All-MVC recipients entering this season in six years as a league member (1996-98 as an affiliate member; 2017-19 as a full member) and was the most First Team All-Conference honorees in a single season since the 2006 side placed three players onto the First Team All Mid-Continent Conference squad.