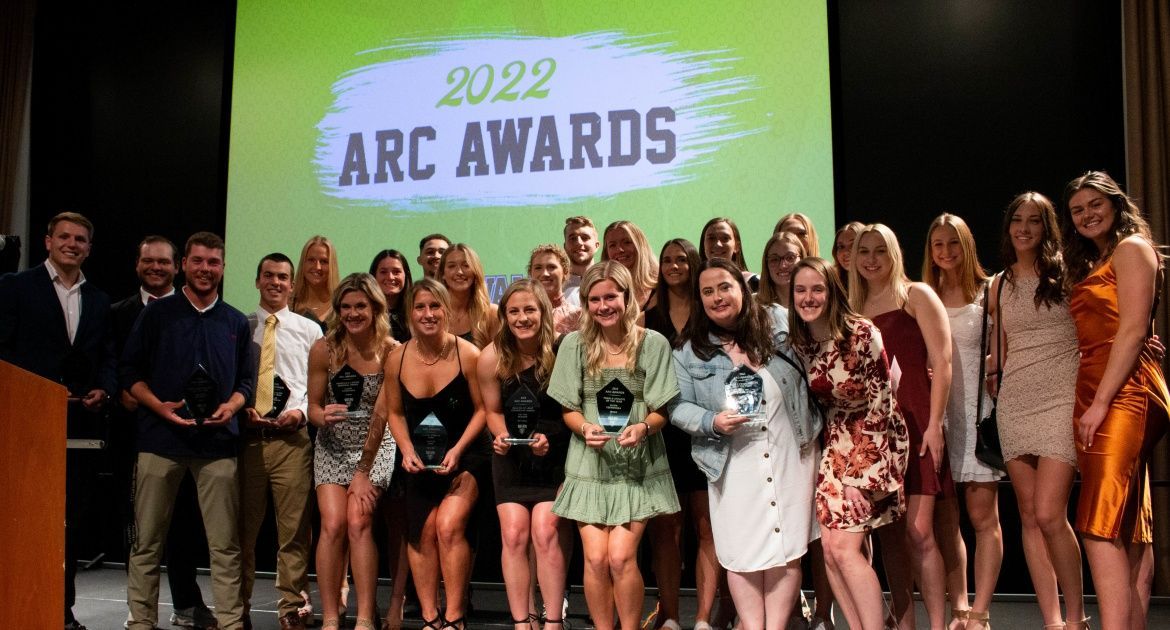 For the first time in three years, Valpo Athletics student-athletes, coaches and staff were able to gather in person at the Harre Union on Sunday evening for the annual ARC Awards ceremony, celebrating the successes of this academic year and presenting the year-end awards, as voted on by the Student-Athlete Advisory Committee.

This year’s Newcomer of the Year awards went to basketball’s Kobe King and volleyball’s Elise Swistek, both of whom earned postseason recognition from the MVC for their achievements in their first year at Valpo. Men’s golfer Anthony Delisanti brought home the Male Performance of the Year award for his stellar performance in earning medalist honors at the MVC Championship, highlighted by shooting 6-under par on the back nine in the final round to come from behind for the victory. The Female Performance of the Year went to the volleyball team for their thrilling sweep of UConn in front of a raucous crowd at the ARC in the semifinals of the NIVC.

Valparaiso University President José Padilla had the opportunity to attend the ARC Awards for the first time since taking office and spoke to the group before presenting the inaugural Beacon of Light Leadership Awards, won by men’s golf’s Garrett Willis and softball’s Peyton Moeder. Director of Athletics Mark LaBarbera, attending the ARC Awards for the final time before his retirement, was honored by the student-athletes in a tribute video and presented the Anderson-Hoffman Memorial Service Award — awarded to the student-athlete who best demonstrates what it means to be a champion in the community — to volleyball’s Brittany Anderson.

Men’s basketball’s Ben Krikke and tennis’ Claire Czerwonka received the Bill Steinbrecher Sportsmanship Award and the Rebecca D. Carter Memorial Award, respectively, which are given to the male and female student-athletes who have best exemplified integrity and sportsmanship while representing Valparaiso University. Women’s basketball player Caitlin Morrison and football’s Gavin Twigg were honored as the Comeback Athletes of the Year, while the Unsung Hero awards went to soccer’s Natalie Graf and football’s Ben Niesner.