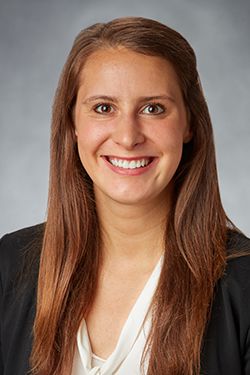 After rewriting the record books during her accomplished playing career from 2014-2018, Dani Franklin joined the Valparaiso University women’s basketball coaching staff as an assistant coach under head coach Mary Evans heading into the 2019-2020 season.

In her first season on staff at Valpo, Franklin helped guide one of the nation's most impressive year-over-year turnarounds. The 2019-20 Valpo squad jumped 171 spots in the RPI to 133 - the largest leap by any Division I program in the nation.

The former Valpo standout returned to her alma mater after spending the 2018-19 season as a graduate assistant at Mercer University under veteran head coach Susie Gardner. There she contributed to a successful season that saw the Bears finish 25-8 overall and a perfect 14-0 in conference play on their way to winning the Southern Conference Tournament and receiving an automatic NCAA Tournament berth. Mercer nearly knocked off Iowa in a first-round matchup before falling to the second-seeded Hawkeyes 66-61. In her role at Mercer, Franklin handled graphics, worked with film, oversaw student managers and assisted with scouting and game preparation.