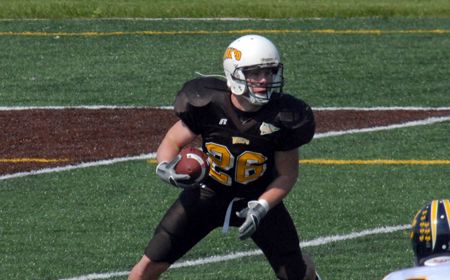 John Popper was a Second Team All-PFL pick as a return specialist.

Kozey, a senior offensive tackle, helped pave the way for the Crusader ground game this season.  A repeat First Team selection from 2007, he anchored a line that helped Valpo rushed for a PFL-leading 175.2 yards per game in 2008.

McHenry, a senior fullback, mainly was used as a blocker for the Brown and Gold.  He did have 10 carries on the year as well.

Koepke, a fifth-year senior linebacker, finished the season second on the team in tackles with 69.  He finished his career with more than 240, and had 4.5 tackles for loss in 2008.  He also intercepted a pass for the Crusaders.

Popper, a junior kickoff and punt returner, led Valpo with 1,356 all-purpose yards on the year.  He returned 16 punts for an average of 12.0 yards each, and returned one for a touchdown.  He also averaged 22.6 yards per kickoff return, including a long of 59 yards.

Myers was Valpo’s top wide receiver on the season, hauling in 21 passes for 269 yards and a touchdown.  The redshirt-freshman had a long of 40 yards, and averaged 12.8 yards per catch.

Mack finished fourth on the team in tackles with 51, including 5.5 for loss.  The defensive end had 1.5 quarterback sacks, broke up a pass, and was credited with four quarterback hurries on the year.

Rundh, a junior defensive lineman, had 42 stops, including 8.0 for loss on the year.  He was just named a Second Team Academic All-American, and led the Cruasers with 2.5 sacks.  He also recovered a fumble and blocked three kicks on special teams.

Dillon, a fifth-year senior linebacker, led Valpo with tackles with 87 on the season.  His 7.5 tackles for loss included a quarterback sack and he forced two fumbles and recovered two others.

Curry, a defensive back, led the PFL with seven interceptions on the season, and ranked among the top-five nationally in that category.  The junior also broked up six other passes and finished the year with 49 total tackles, including three for loss.